Andrew Stoltmann: The Go Get 'Em Lawyer from Chicago

Competent, ethical and morally outraged, attorney Andrew Stoltmann is exactly what burned investors need when it comes to going after the Wall Street brokerage firms that have been pilfering portfolios the last few years. "Judges and Arbitrators have been reading about the bad things that Wall Street brokerage firms have done," says Stoltmann, "and there have been some huge arbitration awards in the last 2 to 4 months. I think that is going to continue. This is a prime environment for going after bad brokers and bad firms." 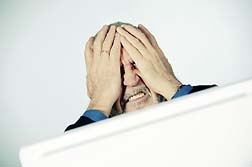 Disappearing Life Savings
And battered bond funds Batman--is Stoltmann going after them! He's been trading punches with some of Wall Street's best known behemoths like Wachovia, Merrill Lynch, Edward Jones, Morgan Stanley Dean Witter and the list goes on including at least 60 ongoing arbitrations and lawsuits against Morgan Keegan.

On this particular morning, he's heading for an arbitration hearing with the Financial Regulatory Authority (FINRA) in St. Louis, in an effort to recover thousands of dollars for an 80-year-old woman in a nursing home who trusted her life savings to Morgan Keegan. About 70 percent of the money disappeared; lost in a high-risk bond fund the company sold to her two years ago when she was 78.

Bond Funds are not necessarily Safe Funds
"These kinds of bond funds collapsed because of big concentrations of high risk derivatives," says Stoltmann. "Make no mistake, Wall Street and investment firms used the common perception that bonds are something safe and secure to their advantage. They goosed up the returns by lacing them with high-risk derivatives and did not make the risks clear to investors."

His St. Louis client is suffering from dementia and if the arbitration fails to recover the money, she may be looking at a move. "When what's left of her money runs out she isn't going to be able to afford the nice nursing home she is in," says Stoltmann. "It hasn't changed yet for her, but it probably will in the next 6 months, unless I can get this money back."

Retirees Taking it on the Chin
Stoltmann's Chicago practice is entirely focused on helping individuals recover investment and retirement plan losses. "I think it has been retirees over the age of 65 who have really taken the brunt of the fraud," says Stoltmann. They've really taken it on the chin." Investor horror stories that were once inconceivable are now common. "It is not unheard of to see people who have lost 90 percent of their worth. They have to go back to work, move in with relatives or delay retirement," says Stoltmann.

Stoltmann's Four-Letter Checklist
When it comes to arguing his case to recover money Stoltmann says he goes down his four-letter checklist.
S – was the investment suitable for the client given their age and risk tolerance
C – was the investor's account churned or repeatedly rolled over in order to earn fees for the broker
U – were the trades and changes in the account unauthorized
M – were the risks and type of investment misrepresented to the client

Judging from the cases Stoltmann has seen and won, he believes there are many cases where brokerage firms and mutual fund managers put their interests far and above their investors. "When you're dealing with people's life savings you must have strong fiduciary responsibility to them," adds Stoltmann.

"How can they sleep at night?" says Stoltmann. "They sleep very nicely in their mansions."

More Financial Fraud News
Get the Right Lawyer
For those investors who were victimized by bad investments Stoltmann offers another and very important observation. "Hire a lawyer who works on a contingency fee basis," he says. "Paying a lawyer on an hourly basis to work these cases is not a good strategy."

After graduating from the University of Wisconsin (Madison) with a Bachelor of Business Administration degree, Andrew Stoltmann worked as a licensed stockbroker. While in law school at DePaul University, Stoltmann clerked at the Chicago NASD Dispute Resolution office, where 95 percent of securities arbitration cases are decided. His firm, Stoltmann Law Offices, concentrates on recovering losses in investment fraud cases.

Posted by
Jim Shuce
on August 27, 2017
Andrew Stoltmann is a clown.