The veteran civil rights firm of Loevy and Loevy has filed suit against Chicago police for Tasering a man 11 times in his own home as he suffered a diabetic seizure. "This is essentially a police brutality suit," says senior attorney Arthur Loevy. "Not only did the defendants use excessive force, but they also showed a lack of understanding about the pain and damage that a Taser gun can cause." 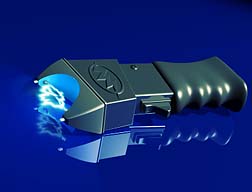 In April 2009, 40-year-old Prospero Lassi was gripped by a diabetic seizure and fell to the floor in his suburban Chicago home. His roommate called 911 and asked for emergency medical help. "When the police and the paramedics arrived, Lassi's roommate restated that Lassi had a medical problem," says Loevy.

As Lassi flailed about, one of his limbs struck one the attending officers. Another officer then drew his Taser and zapped Lassi 11 times with a powerful electric shock. According the documents, Lassi was Tasered for almost a full minute.

"I don't know if he did it because he misjudged the situation or because he didn't pay attention to the fact that this was someone who was having a diabetic reaction," says Loevy. "We don't know why the police officer felt the need to Taser Lassi for this length of time. It is hard to tell. But it is on its face an unacceptable use of force."

The suit also raises questions about the officers who stood by and watched Lassi repeatedly Tasered without intervening.

Lassi was hospitalized for five days and was left with what is believed to be a permanent scar on his face where one of the Taser shots landed. "Lassi is an employee of Southwest Airlines," says Loevy. "He's a good solid fellow in his 40s. He is a law and order kind of guy."

Taser not on Trial

More CIVIL RIGHTS LAW News
Although the suit involves the use of the Taser, the controversial electroshock weapon is not on trial. "This is not a case that says any use of the Taser in and of itself is excessive force," says Loevy. "But a Taser can be used to effectuate excessive force the same way as a wand or a gun. In this case the Taser was an instrument of excessive force. It wouldn't have been different if he had taken a club and hit Mr. Lassi."

No Charges for Lassi

Lassi was never charged with any crime and did nothing to warrant the actions of the police, according to the complaint filed by Loevy on behalf his client.

Arthur Loevy graduated from the Michigan University of School of Law and has practiced law for more than 40 years. Loevy and Loevy has won numerous high profile eight-figure verdicts on behalf of people whose civil rights have been violated, particularly in the area of excessive force and wrongful conviction.