The video posted on YouTube shows a large gray sedan blocked in on a friendly neighborhood side street in Torrance, California with a 39-year-old black woman behind the wheel. The car accelerates and rams a police car, then lurches forward and rams another police car. Three Torrance police officers fire 33 bullets in rapid succession into the vehicle. Michelle Shirley, a mother and a graduate of Loyola University law school is gravely wounded and within an hour she is pronounced dead at County Harbor – UCLA Medical Center on October 31, 2016. 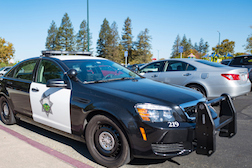 “To shoot an unarmed woman 33 times who had never done anything wrong in her life – really? --- Couldn’t you shoot out the tires?” says Danny Abir, managing partner of Abir Cohen Treyzon Salo in Los Angles, California which has filed a wrongful death suit against the Torrance Police Department, the city of Torrance and a police officer in relation to Michelle Shirley’s death.

“She was bipolar. She also had a J.D. She had not passed the bar but she had a law degree and she had not had a bipolar episode in over ten years,” says Abir. “She was a mother and she had recently moved to California to re-establish her life and bring her son to live with her. No prior history, no guns, no drugs, nothing. She was just bipolar.”

“We do civil rights cases all the time and believe me this woman was an angel,” says Abir. “This case really upsets me.”

There were bouts of mental illness in her distant past, but Abir describes Michelle Shirley as a bright young woman from “a salt of the earth, well-educated family from San Diego” who certainly did not look like a threat to anyone.


Shirley was driving for Uber on the day of the shooting. According to the statement of claim just prior to the incident she had been hit by another car on the driver’s side.

“She had been T-boned on the driver’s side a few minutes before, which I think probably triggered a bipolar episode," says Abir. "She continued to drive. Witnesses called the police saying there is a woman playing loud Mariachi music driving somewhat erratically down the street. The cops come and chase her eight to seven minutes and then they block her in. They get out of their cars guns drawn and she puts her foot on the gas and starts driving again.

“I don’t understand how you shoot a woman in a car, unarmed, 33 times. That doesn’t work for me. That bothers me. This is wrong!” he says. “And there was a gas station on the street!”

More RIGHTS News
The late Carrie Fisher and the actress Catherine Zeta Jones have both done much to raise awareness about bipolar disorder. According to the Anxiety and Depression Association of American the condition is entirely treatable.

At the crux of the issue Abir says is the fact that Michelle Shirley was black.

“She had not done anything wrong in her past,” says Abir. “Carrie Fisher was bipolar and Catherine Zeta Jones is bipolar. You want to tell me if one of those people was behind the wheel the police would have been shooting 33 bullets into the car?”

The case is now moving into the discovery phase.

The lawsuit is brought on behalf of Michelle Shirley’s 14-year-old son and his guardian. The suit states 7 causes of action including wrongful death, negligence and negligence in hiring, retention and training.

If you or a loved one have suffered losses in this case, please click the link below and your complaint will be sent to a civil & human rights lawyer who may evaluate your Rights claim at no cost or obligation.
Request Legal Help Now

Posted by
Dawn Bundy
on October 22, 2017
Help
Posted by
Justice For All
on July 29, 2017
First of all, a three thousand pound automobile is a lethal weapon in the hands of any person who is clearly acting out of control. This woman’s intent to harm was apparent when she refused all orders to stop and attempted to gun the engine while pointing her car toward unprotected officers.

Secondly, the story of her life, education, accomplishments and past mental illness would have had absolutely no bearing on the outcome of this situation even if it had been known by the involved officers prior to the incident.

And finally, to assume that the driver’s race somehow contributed to her being shot is a direct insult to the integrity of all of the eyewitnesses at the scene and not only maligns the officers who were trying to defend their own lives but also denigrates the nature of all good police officers and the communities they are sworn to protect.

There is no doubt that everyone involved is a victim in this incident. It is truly sad that this woman suffered from mental illness and was unable to maintain her life with the professional treatment that failed to have potentially prevent this tragedy. It’s also quite sad that the lives of these cops were jeopardized to the point that they were compelled to take the life of another human being. But, most of all, it’s extremely sad that an innocent child has lost his mother.

It would simply be the right thing to do to provide some level of financial compensation to help the driver’s son cope with the loss of his mother. But, there needs to be a better way of dealing with this matter without an apparently biased loudmouthed attorney doing a lot of finger-pointing, casting aspersions, and assigning blame to the innocent.

Police officers should not have to be challenged about their split-second reactions when it is very apparent that their life or someone else’s life was placed in imminent danger and have the witnesses to prove it. Regardless of perspectives, attitudes, or what anyone else says about officer involved shootings, taking any person’s life wreaks a dramatic toll on all police officers.

It simply isn’t fair to try to rationalize or minimize the dangerous behavior and actions of a mentally ill person when lives are at stake. They too are a victim of their own diseased mind and unfortunately when they lose control of that mind and place others in danger of their lives, there will be a high price to pay.