‘Back the Blue Bill’ Will Crush Civil Rights/Wrongful Death Lawsuits

The noise from Washington D.C. these past months is such a wild, aggressive cacophony of loud voices, tweets, emails, conflicting opinion and unending TV gab that it is easy to overlook some very significant Trump inspired legislation making its way through the House of Representatives and the Senate. 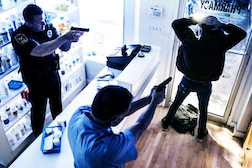 The Back the Blue Act of 2017, put forward by Republican Senator John Cornyn from the state of Texas and supported by 15 other Republicans, was recently introduced in the Senate. The tone and details of the bill are very much in keeping President Trump’s law and order campaign promises.

The legislation would make it a federal crime, punishable by death, to kill a police officer. It would also assert federal control over local governments and put a financial stranglehold on lawsuits brought by individuals who claim they, or a family member, is a victim of extreme force at the hands of a police officer.

According to the critics, Back the Blue bill would make police officers virtually immune to civil liability, even in the most horrific instances of abuse.

Attorney Danny Abir, a passionate attorney and advocate for many individuals who have brought lawsuits against police officers and police departments, is appalled by the bill.

“If this bill passes that will be the end of civil rights cases as we know it,” says Abir, managing partner at
Abir Cohen Treyzon Salo in Los Angles, California.

About 30 percent of the firm’s work involves civil rights cases.

It currently represents the teenage son of an unarmed 39-year-old black woman. The mother with bipolar disorder was shot 33 times by police after a car chase in Torrance, California in October, 2016. It also represents the family of Toshi Brown in a wrongful death lawsuit. Brown was tasered 7 times and then choked to death by a police officer on the Las Vegas strip in May, 2017.

“I get emotional about this,” says Abir. “It bothers me. It is not right. You don’t taser someone seven times and then choke them to death.”

Abir will tell you civil rights cases involving police officers are difficult cases to move through the courts. They are research intensive and time consuming. The lawyers’ fees will always be significant in that type of case. Not only that, the burden of proof always rests heavily on the plaintiff to prove their rights were violated and that the police knew or should have known what they were doing was wrong.

Suing the cops is already difficult.

“Look, I think the police have the toughest job in the world, I have a lot of respect for them, but you can’t just kill people,” says Abir.

More RIGHTS News
The Back the Blue proposes that even if a case gets into a courtroom the officer or police department’s liability would be limited to ‘out of pocket costs’. Attorney fees would be capped at a ridiculous rate. The new rules would make it impossible for anyone to get a lawyer to represent them according to Abir.

“That will be the end of civil rights cases,” says Abir. “Pretty much the maximum money is ‘out of pocket costs’. That would be basically funeral costs for the victim. Attorney fees limited to ten or twenty percent – I mean who is going to take a case for 20 percent of out of pocket costs in that case. It doesn’t make sense!”

“Really, I don’t know what is wrong with Washington these days,” says Abir.

If you or a loved one have suffered losses in this case, please click the link below and your complaint will be sent to a civil & human rights lawyer who may evaluate your Rights claim at no cost or obligation.
Request Legal Help Now

Click to learn more about LawyersandSettlements.com
LawyersandSettlements.com - A trusted, independent legal news provider bringing quality news and information on all legal cases and lawsuits filed in United States of America to its readers since 2002. Over 250,000 legal help requests including Civil & Human Rights Cases, and Whistleblower Cases have been forwarded to lawyers all across to the country.