Out of a duty to the public good, two attorneys from Seattle have taken on a class-action suit aimed at ensuring that low-income and indigent persons charged with misdemeanors in Mount Vernon and Burlington are afforded all the rights afforded to US citizens. "We got interested in the idea just as conscientious attorneys," says Toby Marshall, from the firm of Terrell, Marshall, Daudt & Willie. "We started investigating about six months ago, doing public disclosure requests, getting documents and interviewing people." 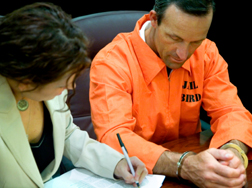 "We intend to present evidence that will show the public defense system in Mount Vernon and Burlington is broken. At the end of the day, our clients are asking for only one thing: to fix the system," says Marshall's co-counsel, Matthew Zuchetto, from the Scott Law Group.

Despite numerous letters and complaints from individuals who believe they did not receive adequate legal representation, the defendants knowingly allowed their two part-time public defense system attorneys to be overloaded.

"The Washington State Bar Association guidelines say that full-time attorneys doing public defense work should not have more than 400 cases per year," says Marshall, "but they are both doing around or more than 1,000 cases, which is off the charters in terms of what the guidelines call for."

"So you have two overworked attorneys, they are under-funded and, as a result, there is just a complete denial of representation of people," says Marshall. "They do not have attorneys visiting them when they are in jail, the attorneys don't respond to their phone calls. All they get is a minute or two in a packed courthouse where the attorney essentially says 'this is the charge against you' and this is what the prosecution is offering—and that's it."

The complaint recounts the experiences of a number of dissatisfied persons who appeared in court in Mount Vernon and in Burlington. In one instance in Mount Vernon, a defendant met with the public defender at her court hearing and said, "I am not going to sign anything that is not true." When the attorney asked if she meant "she wanted to go to trial," the attorney then said, "Well good luck with that."

More CIVIL-HUMAN RIGHTS News
"They don't get representation in terms of the basic fundamentals of someone explaining what their case is about and sometimes it is a lot worse than that," says Marshall. "They get bad information, wrong information, if they are innocent there is no investigation of their case, there is no attempt to try to prove their innocence, and it is resulting in a systematic problem."

The class-action suit, filed in Skagit County, seeks no monetary damages and is aimed only at securing injunctive relief for persons who go unrepresented or under-represented by legal counsel.

Marshall and his co-counsel Matthew Zuchetto are asking only for fees.


Toby Marshall concentrates his practice on complex civil litigation, consumer protection and employment law. Toby has represented workers and consumers in a variety of class actions, including wage and hour, product defect, and consumer fraud cases. Matthew Zuchetto is based in Spokane and practices consumer law.

If you or a loved one have suffered losses in a similar case, please click the link below and your complaint will be sent to a civil & human rights lawyer who may evaluate your claim at no cost or obligation.
Request Legal Help Now

Posted by
Corey Shubart
on October 19, 2016
You should check Yakima out while your at I have lost two jobs and has made my name look bad I was the only one in my case that got screwed did some work got paid with stolen check then made out to be the one who stole the check not my handwriting or no money no check was cashed and on the supposed last day in court my lawyer said he couldn't be my lawyer anymore due to conflict of interest so I now have to start over and cause of this I have lost my job for the second time due to missing work for to many days
Posted by
Fred rubble
on May 10, 2014
The reality that citizens and the public need to realize that public defender work for the state and they are paid by them. It is a very rare situation will any person will find a public defender who is willing and offer to help through any trial or let alone fight on your behalf. It is very crucial that someone who gets in trouble needs to realize that you are at the mercy of the state and your public defender. Their are times that a regular person will do better at defending himself than with a public defender who is not protecting your interest what so ever. Once you are sucked into the system it is almost nearly impossible to get out. It is a domino affect that just keeps going down hill instead of forward, you maybe able to take a step forward but always will take ten steps back. You see yourself fighting a battle and what the easiest thing to do is give up instead of fighting for what you believe in. I praise those lawyers who are out their fighting for the unfortunate ones who have become victims to public defenders who could care less for protecting the innocent that are lodged into the court sytem. Every case is different and everyone must either win or lose a case, however when all the facts & witnesses are presented and of course with the assistance of legal counsel that person then has a shot of being cleared from any wrong doing. This is a rare case much to often you will find yourself on the losing end than on the wining end. The best thing to do is just stay away from all trouble and avoid the court room so no one has to feel that they have been wronged. Thank you for your time. Good Luck to all.
Posted by
Jennifer Taylor
on November 27, 2012
My husband is now serving a 34 month sentence for defending himself. He had a public defender. from the beginning there was really no contact with the public defender, we were at a loss for what to do. we have no legal background. he told us that we were not able to call rebuttal doctors due to the hippa laws. my husband was offered a plea of 3rd degree assault and when he did not take that they added 2 degree assault with a deadly weapon and his public defender told him that he was now looking at 2 strikes and an outrageous sentence of 8 years. that was not the case he just didn't know his job. When me a person with no legal has to tell him about his job. Then when the trial started the public defender wouldn't do anything that we were asking him to do he wouldn't even bring the fact that the weapon was never fingerprinted, that the doctors from the first hospital were never brought up and the fact that the so called victim was on drugs, and that the prosecutor was trying to reenact the incident when she is of very small in size and put off the thought that the so called victim was very small in size. my son and i were witnesses to the incident and there were no other people there. the prosecutor based her case on the that we had to much time to make up the story but when i took the so called victim to the hospital i told the nurse what had happened but the public defender that and her said that we couldn't get that information due to the hippa laws. i just don't understand how a man can be put behind bars for defending himself!!! if anyone can help me with some information i would greatly appreciate it. Thank U
Posted by
Terry
on October 15, 2012
I've noticed that criminal courtrooms have more poor people in them in the first place, and that the crimes they are charged with committing were, for the most part, not even crimes 30 years ago! Now, the things they are charged with carry heavy fines and even jail time - for things we didn't even have on the books when I was a teen. The things we did have on the books for misdemeanors are now felonies! WTH? The 'get tough on crime' just made EVERYTHING a crime, without doing a thing to help alleviate REAL crimes like murder, rape and assault. The numbers bear me out, too. We are putting millions behind bars for things that simply were NOT crimes, and some today were not BIG enough crimes to warrant jail and/or enormous fines. We're stuffing our poor into prisons then wondering why they cannot dig themselves out of the pit of poverty!

When did America lose all its common sense?!