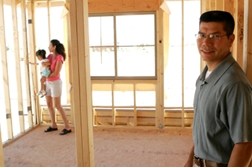 Homes made with certain Chinese drywall have reportedly had problems, including corroded electrical wiring and corroded metal pipes. The 300 homes included in this repair project will have the pipes and wiring replaced and the drywall removed. Homeowners will also have their relocation expenses covered.

According to USA Today (10/15/10), some homeowners with Chinese drywall have won their lawsuits alleging their homes were ruined by defective Chinese drywall. This includes a Louisiana family that was awarded more than $164,000 and an award of $2.6 million to seven families in Virginia.

Meanwhile, the IRS has said tax breaks will be given to homeowners who suffered property losses because of defective Chinese drywall installed between 2001 and 2009. According to Business Week (10/07/10), repairs to homes for damage incurred because of the drywall can be treated as casualty losses.

More CHINESE DRYWALL PROBLEM News
Problems with wiring and metal corrosion not only mean homeowners have to bear the cost of repairs to their homes, but they could also mean a substantial decrease in property values. Some residents report that the copper tubing in their home has turned black. Reported health problems include respiratory difficulties, headaches and nosebleeds.

Lawsuits have been filed against homebuilders and drywall manufacturers alleging that homes are eroding because of Chinese drywall. One family who has joined a class action lawsuit says that two children became sick because of the drywall. Their newborn son became ill once he was brought home from the hospital. According to My Fox Tampa Bay (10/15/10), the infant was underweight, wouldn't eat, had ear infections and a cough.

It wasn't until his mother, Kate Quinn, discovered the home was made with Chinese drywall that they figured out what was wrong. The family now rents a home and both children have recovered.