Benzene from Gulf Oil Spill a Concern for Workers and Residents

Those tasked with cleaning up the massive BP oil spill, as well as those who live in the vicinity of the spill, are concerned about exposure to benzene. Tests conducted by BP on workers engaged in cleaning up the spill reveal that some have already been exposed to the carcinogen. 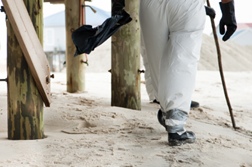 According to the 6/11/10 issue of Greenwire, an occupational health expert with experience in the cleanup of the Exxon Valdez spill in 1989 says news of benzene exposure with this latest spill came as an unwelcome surprise.

"They're trying to say it's not that bad, but I'm looking at it and saying, wow—that would be enough for me to say there's [notable] exposure," he said, speaking candidly on condition of anonymity. He added that the number of air samples BP has taken is "shockingly low...you would expect a lot more sampling data, but it can be difficult to take a lot of these samples."

House Education and Labor Chairman George Miller (D-California) urged BP CEO Tony Hayward in a communiqué to request full worker monitoring. To do anything less "is irresponsible," he wrote. "The magnitude of the Deepwater Horizon disaster is unparalleled and the potential health risks for cleanup workers remains largely unknown."

Miller has urged BP to expand its existing request for a National Institute for Occupational Safety and Health (NIOSH) hazard evaluation of a portion of Louisiana coastal workers.

BP had released limited test results in an effort to quell public concern about the number of workers engaged in cleanup efforts who already reported health symptoms.

"It is important to recognize that the risks to the health of people from the chemicals associated with both the crude oil from the leak and the dispersants used to clean up the oil are very low," the company stated in a preface to its testing data.

Greenwire reports that NIOSH sets much lower exposure limits than the Occupational Safety and Health Administration (OSHA) for several chemicals monitored during the cleanup of the oil spill, including benzene.

OSHA exposure limits are based on an eight-hour workday. However, many responders near the leaking well are working longer hours than that.

More BENZENE News
"I wouldn't use OSHA standards here as the sole measure for decision-making for protection of workers," said Steven Markowitz, an environmental science professor at the City University of New York who directed a clinic that treated response workers after the September 11, 2001 attacks.

"[Gulf] workers will likely have exposure to mixtures of substances which OSHA standards don't address. One of the things we learned from the World Trade Center is, when you're unsure, err on the side of protection. Don't err on the side of false reassurance."

NIOSH, a division of the Centers for Disease Control and Prevention, sent two teams to the Gulf earlier this month to test for chemical exposures of workers burning off collected oil and placing booms to help contain the spill.

Not addressed in the report is the level of benzene in the air. News crews dispatched to the Gulf have all commented on the smell of oil in the air, which means that benzene exposure could be more widespread than originally suspected.

If you have suffered losses in this case, please send your complaint to a lawyer who will review your possible [Benzene Lawsuit] at no cost or obligation.
Request Legal Help Now