It’s there – like a sub audible hum – underneath Sanofi-Aventis’s decision not to disclose the risk of permanent Taxotere hair loss. It will certainly be there, underpinning the drug manufacturer’s offers to settle the lawsuits according to National Trial Lawyers. The effort to minimize the harm that Taxotere alopecia does to breast cancer survivors, though rarely said aloud, goes a lot like this: 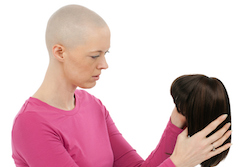 Permanent baldness can be devastating for women. Hair loss reportedly causes more psychological pain for some breast cancer survivors than the loss of a breast. Yet, evidence suggests that Sanofi-Aventis chose to hide the danger, minimize it, and play it down when it happened. Motivation is anyone’s guess. It’s just hair, and you know how women can be about that.

Studies show that for women more than men, sexuality, attractiveness, and personality are symbolically linked to hair. Hair loss can seriously affect self-esteem and body image. In a study of cancer patients with and without alopecia, those with alopecia had a poorer body image and worsening self-concept after the loss. In other, research about 40 percent of women with alopecia report marital problems as a consequence, and about 63 percent claim to have had career related problems.

Christine tells a more personal story: “I will never forget leaving the dermatologist’s rooms after being told that my lack of hair growth was due to my particular cocktail of chemo drugs, the likely culprit being Taxotere. I was utterly devastated as I felt I had lost my femininity and aged another 20 years, all at once. It was so much worse than losing a breast to cancer, because that could be fixed – I had undergone a reconstruction.”

More TAXOTERE HAIR LOSS News
The FDA approved Taxotere in 1996. At the time, patient warnings included only information about temporary hair loss. As early as 2009, European labeling for Taxotere warned of cases of permanent alopecia. Studies over a number of years reported permanent alopecia in between 6 and 15 percent of patients. Not until 2015, however, did the FDA update US safety warnings to include the possibility of permanent baldness.

Were Taxotere the only effective drug on the market to treat breast cancer, patients’ decision-making might have been different. However, studies suggest that paclitaxel (marketed as Taxol in the US) is just as effective at combatting cancer. It appears to be less toxic than Taxotere. It’s also a generic and cheaper. The choice for patients has not been about life or death, but between treatments that have more and fewer side effects and may cost less.

Posted by
Brenda
on February 18, 2019
My supervisor told me two weeks ago that I needed to work on my appearance. I need to "look more put together like the other girls". I have no eyebrows, no eyelashes, and very thin hair. Wonder just how I am supposed to that! You have to have eyelashes to get extensions. I have been even more depressed than usual about my appearance. Need the job, but also wanted to tell her off and ask if she thought I chose this. Really stuck between a rock and a hard place. Have gone home and cried for two weeks. Even went and got a haircut to see if that would help. Stylist said my hair was too thin to do what I wanted.
Posted by
Kris
on November 14, 2017
Yes I am super angry about this! !!!What is wrong with being alive and having hair back? If taxol was given to me as an option, I would not feel this way. If I was told my hair was not going to grow back, I would not feel this way. None of this happened and it should have! That's the point people!!!!!!! We didn't have to be BALD!!!!!! Screw all you judgemental folks! I thank GOD every single day that I am alive!!!!!!!!! But I didn't have to be deceived because pharmaceuticals !!!!


You guys should have told us Taxotere would permanently take our HAIR!!!!!!

Posted by
Lynn
on November 13, 2017
I have permanent hair, eyelash, eyebrow and body hair loss from this drug. I am a woman who likes to look pretty!!!!! This has taken away my desire to live!!!! What women wants to be ugly? The joy of life for a woman is to be attractive/feminine. Who would not know that hair is everything for a woman....don't agree? Let's see you use yours!!!!!!!
You no longer feel attractive, feminine, desirable, people who don't deal with this do not understand. People who have not had this misfortune compete with you still and you have this liability at no fault of your own but of the drug company who withheld this information!!!!!!!! They all should go to prison!!!!