Were you looking for 500,000 Volkswagens Recalled for Cheating on Emission Controls or California Volkswagen Dealership Lawsuit or VW Canada Recall lawsuits?

Volkswagen has announced a recall of around 500,000 diesel cars after the Environmental Protection Agency accused the carmaker of cheating to pass emissions testing. The Volkswagen recall affects certain diesel Volkswagen and Audi vehicles with the model years 2009-2015. Volkswagen lawsuits have now been filed on behalf of plaintiffs who may have been financially harmed by Volkswagen's alleged actions.

Send your VW Recall claim to a lawyer who will review your claim at NO COST or obligation.
GET LEGAL HELP NOW

The Volkswagen recall was announced September 18, 2015, after the US government ordered the carmaker to recall certain cars, alleging the company installed software in those vehicles to allow them to pass emissions tests. 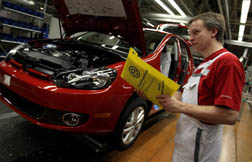 Under the Clean Air Act, there are limits to how much pollution vehicles are allowed to emit. According to the Environmental Protection Agency (EPA), Volkswagen allegedly used software to determine when the cars were being tested. That software then used emissions control systems to make it seem that the vehicles' emissions were within regulated limits. When the cars were on the road in normal driving situations, however, the emissions controls were off and the cars were reportedly emitting pollution up to 40 times that allowed by the Clean Air Act.

Volkswagen has reportedly admitted to the use of the software to pass emissions testing.

The New York Times (9/18/15) reports that pollution controls limit the amount of nitrogen oxide released from the car, but can affect performance including torque and acceleration.

As a result of the government's investigation into Volkswagen's actions, Volkswagen has recalled around 480,000 diesel Volkswagen Jetta, Beetle, Golf, Passats and Audi A3 cars. All cars except the Passat are model years 2009-2015. The Passat is model year 2014-2015. Vehicle owners would likely receive recall notices alerting them to the recall and informing them of where to have their cars repaired at no cost. Additionally, the company could reportedly face up to $18 billion in fines and criminal charges.

In the wake of the recall, Volkswagen's CEO resigned his position.

A Volkswagen class action lawsuit has now been filed on behalf of Volkswagen owners who are affected by the recall. Owners say they bought the vehicles for their clean emissions and good gas mileage but may be forced to sell the vehicles for significantly less than they paid. They also say their lives are affected by the hassle of dealing with having their vehicle repaired.

The lawsuit, case number 2:15-cv-00405, accuses Volkswagen of being greedy and using deceptive practices. According to CNN (9/23/15), up to 34 federal lawsuits have been filed against Volkswagen. More lawsuits could be filed. Plaintiffs could seek compensation for expenses and loss of value to the vehicle, punitive damages and damages for emotional distress. Diesel car owners may have paid up to $7,000 more to buy the diesel vehicles.

Class action lawsuits have also reportedly been filed in Canada and the UK. The Canadian lawsuit alleges Volkswagen wrongfully fixed admissions tests and misled consumers into buying certain Volkswagen vehicles. The lawsuit reportedly seeks $1 billion for damages linked to the diminished value of the vehicles, mental distress, frustration, and expenses linked to repairs, as well as punitive damages.

If you or a loved one has suffered similar damages or injuries, please click the link below and your complaint will be sent to an automobile defect lawyer who may evaluate your claim at no cost or obligation.
Please click here for a free evaluation of your VW Recall claim
Last updated on Mar-30-17

Santa Clara, CA: Volkswagen has agreed to either fix or buy back some 500,000 VW and Audi diesel vehicles in the US equipped with illegal emissions software designed to hide nitrogen oxide emissions. This announcement follows the September 2015 recall of around the same number of vehicles.READ MORE
New Jersey Lawsuit Filed against Volkswagen Over VW Emissions Scandal

Jersey City, NJ: The state of New Jersey is following the lead of other jurisdictions in filing a Volkswagen lawsuit against Volkswagen Group of America Inc. and other defendants, alleging consumer fraud and violations of The Clean Air Act. It’s just the latest arrow in the quiver of seemingly endless litigation since September of last year, when the emissions scandal broke.READ MORE
Volkswagen Faces VW Recall Lawsuit by US Department of Justice

Washington, DC: At one time the VW brand was amongst the most revered badges in the world, so much so that VW’s almost 10-year-old “Das Auto” (The Car) campaign suggests in marketing parlance that when a consumer thinks of a car, the only car one needs to consider is the VW. That all changed last year, when consumers and pundits began thinking in terms of das Täuschung (The Deception) over the emissions scandal. Now, with no agreement on a recall strategy, the US government has turned to the courts with the filing of a Volkswagen Lawsuit.READ MORE

Posted by
Kaijah Lapointe
on November 4, 2015
I'm from Santa Barbara county I'm not sure if we have a class action lawsuit. How would I know who to contact for this information? Thank you
Posted by
California
on September 1, 2009
Spent over 500 dollars to have it fixed the first time and looking to spend the same amount again.
Posted by
Michigan
on October 27, 2008
Window stuck inside door panel on rainy Sunday evening. Took car in to be repaired today, was told motor was good, regulator was broken. Service Bulletin was referred to. Total cost of repair is $304.86. Purchased car in July, 2008. 61000 miles currently on vehicle. I've had it for about 3000 miles.
Posted by
Minnesota
on October 6, 2008
The rear passenger window went down and would not come back up. Had it repaired for over $1,000 and was told that eventually the other three windows would also need to be repaired (for another $3,000) when they too soon failed. VW would not cover as my warranty expired two months before, even though this appears to be a very common problem.