Volkswagen Faces VW Recall Lawsuit by US Department of Justice

At one time the VW brand was amongst the most revered badges in the world, so much so that VW’s almost 10-year-old “Das Auto” (The Car) campaign suggests in marketing parlance that when a consumer thinks of a car, the only car one needs to consider is the VW. That all changed last year, when consumers and pundits began thinking in terms of das Täuschung (The Deception) over the emissions scandal. Now, with no agreement on a recall strategy, the US government has turned to the courts with the filing of a Volkswagen Lawsuit. 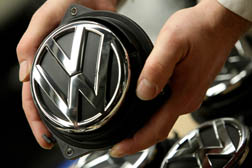 To that end, according to a report in the Wall Street Journal (WSJ 1/5/16), The US Department of Justice (DOJ) has filed an $18 billion VW Lawsuit on behalf of the Environmental Protection Agency (EPA) against the German automaker over the emissions scandal. Market watchers, who initially thought any sought-after sanctions would likely be in the $13 billion range, are sticking by that forecast given the assumption that Volkswagen would likely settle the VW Lawsuit out of court.

Regardless of whether the final bill will be $18 billion or $13 billion, there is little doubt that the biggest cost to Volkswagen has been the hit to its reputation. Even a lower share price, which tumbled by four percent on world markets this past Tuesday, one day after the Volkswagen Recall Lawsuit was announced on January 4, pales in comparison to a now-tarnished image.

According to the WSJ, VW undertook a push of its diesel models into the United States beginning in 2005 amidst an effort to convince American consumers that the current crop of diesel engines were a far cry from the smoky, noisy and smelly engines of yesteryear. Diesels were now quieter, cleaner-burning with improved fuel economy.

Then came the revelation last year that various diesel models sold in the United States were equipped with defeat devices that would promote more favorable emissions testing results than would otherwise be possible. Not only has the admission resulted in a flurry of bad press for the German automaker, but also severely dimmed its reputation in the eyes of consumers and regulators taking an increasingly robust stance on air quality and environmental stewardship. Purchasers of VW diesel vehicles, having spent upwards of $6,000 more for their cars than comparable models equipped with gasoline engines, are sufficiently incensed to launch VW lawsuits against the automaker, as have dealers.

This latest VW Recall lawsuit by the DOJ is seen as not only a retaliation toward VW, but also to serve as a warning to automakers generally that such deception will not be tolerated.

US regulators have been in discussions with Volkswagen over a recall strategy, but participants in the negotiations have yet to find a way forward. Thus, said Cynthia Giles, who serves as the assistant administrator for enforcement at the EPA, “with [the January 4th] filing, we take an important step...setting us on a path to resolution.”

More VW RECALL News
Volkswagen, accused of operating within a culture that tolerated deception, has since parted company with its CEO and is vowing to work cooperatively with the EPA to bring affected vehicles into compliance within a timely manner.

However, even though VW has yet to face criminal charges, the feds have not ruled that out either.

To that end, this Volkswagen Recall Lawsuit could be just the first leg of what could be a very long road for the automaker. The Volkswagen Lawsuit covers vehicles with two-liter engines that were the subject of initial EPA allegations in September, as well as three-liter engines that were the focus of separate charges by the agency in November. Some high-end Audi and Porsche vehicles were equipped with the three-liter engine.

Consumers feel duped in spending additional funds for a vehicle that appears no more cleaner-burning than less-expensive gasoline-powered models, along with the related decline in resale value.

If you or a loved one have suffered losses in this case, please click the link below and your complaint will be sent to a consumer banking lawyer who may evaluate your VW Recall claim at no cost or obligation.
Request Legal Help Now