Serotonin-Norepinephrine Reuptake Inhibitors, also known as SNRI medications, are used to treat depression and other major mood disorders. Some studies suggest that SNRI side effects could include an increased risk of SNRI birth defects. Although most research on similar antidepressants is done on SSRI medications, because SNRI and SSRI antidepressants are similar, there is a possibility that they have similar side effects.

Send your SNRI Birth Defects claim to a lawyer who will review your claim at NO COST or obligation.
GET LEGAL HELP NOW

Serotonin-Norepinephrine Reuptake Inhibitors (SNRIs) are used to treat major depression and other mood disorders, including anxiety disorders, attention deficit hyperactivity disorder and obsessive-compulsive disorder. They work by increasing the levels of serotonin and norepinephrine in the patient's brain.

Some studies suggest a link between medications similar to SNRIs and birth defects, including persistent pulmonary hypertension of the newborn (PPHN). One study, published in the New England Journal of Medicine linked use of SSRI medications, which are similar to SNRI medications, to an increased risk of PPHN (see below for discussion of SNRIs and SSRIs). The study found that women who took an SSRI during their third trimester were six times more likely to have a baby with PPHN than women who did not take an SSRI during the third trimester.

PPHN is a potentially serious condition in which the infant does not adjust to breathing outside the womb. It can be fatal. In cases where the infant lives, surgery and additional medical intervention may be required. 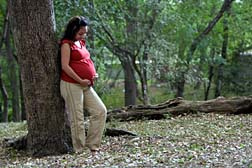 Meanwhile, a 2010 study published in Pediatrics (03/10), suggested a link between the use of certain antidepressants during the second or third trimester of pregnancy and infant development delays. According to researchers, infants exposed to SSRIs or Effexor just prior to birth exhibited delays in sitting up, walking and occupying themselves compared with infants not exposed to antidepressants.

Drugs included in the SNRI class:

Other birth defects reportedly linked to the use of SNRIs and/or SSRIs:

SSRI medications are more widely used than SNRI medications, therefore the majority of research has been conducted on SSRIs. Because both affect serotonin levels, however, there is a possibility that SNRIs and SSRIs have similar side effects and similar risks.

If you or a loved one has suffered damages in this case, please click the link below and your complaint will be sent to a SNRI lawyer who may evaluate your claim at no cost or obligation.
Please click here for a free evaluation of your SNRI Birth Defects claim
Last updated on Apr-9-12

Any woman either contemplating or having recently discovered she is pregnant must always consider the safest route to take when medications are involved. To that end, the Mayo Clinic is a trusted resource for information pertaining to, for example, SNRI side effects.READ MORE
SNRI Birth Defects Can and Have Been Fatal

A study published in Birth Defects Research (Part A, 2012) that found statistically significant associations between the use of a widely prescribed SNRI antidepressant during early stages of pregnancy and SNRI birth defects would be no surprise to the parents of two infants who did not survive after their mothers continued taking Effexor while pregnant.READ MORE
New Study to Examine Risks of SNRI Birth Defects

Citing a lack of information on the effects of SSRI and SNRI antidepressants on infants and newborns, a group of researchers is studying the possible risks of SNRI side effects through a mother’s milk. Researchers hope to add to what are so far conflicting findings on the risk of SSRI and SNRI use during pregnancy and postpartum.READ MORE