Citing a lack of information on the effects of SSRI and SNRI antidepressants on infants and newborns, a group of researchers is studying the possible risks of SNRI side effects through a mother’s milk. Researchers hope to add to what are so far conflicting findings on the risk of SSRI and SNRI use during pregnancy and postpartum. 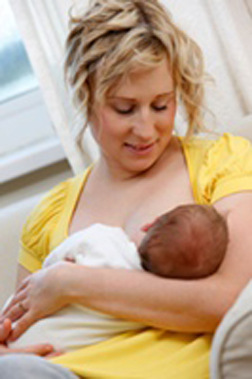 The study, to be conducted in Switzerland and France, examines the risk to the infant when the lactating mother takes either an SSRI (selective serotonin reuptake inhibitor) or an SNRI (serotonin and noradrenaline reuptake inhibitor). The goal is to determine to what extent an infant is affected by being exposed to the antidepressants, either while in the womb or while being breastfed. Approximately 500 enrollees are to be included in the study, which officially began in August 2012.

Researchers also hope to determine how much exposure infants have to antidepressants through breast milk, by taking samples of the milk from the mother. “The lack of information regarding the milk transfer and the safety of these drugs in breastfed infants and the related fear of adverse events for the sucking infant are some of the factors responsible for stopping prematurely breast-feeding or avoiding drug therapy,” researchers noted in the study detail (found online at clinicaltrials.gov).

More SNRI BIRTH DEFECTS News
Noting that there is a lack of information on SSRIs and SNRIs during lactation, even though they are the most frequently prescribed antidepressant medications during pregnancy and postpartum, the researchers set out to determine what effect the medications have on infants. “Research on the safety of use of these drugs for the developing child is an area of great public health significance,” researchers wrote.

The estimated primary completion date, on which the last data is to be collected, is August 2015, with a final completion date of May 2018. Among the factors that will be studied is the growth of infants exposed to SSRI or SNRI medications, the neurodevelopment of those infants and adaptation of infants after in utero exposure to antidepressants.

Although the FDA has issued a warning about SSRI medications (which are similar to SNRI medications) when used during pregnancy, it recently revised its stance, saying studies on the medications are not clear.