According to the Environmental Protection Agency (EPA), about one in six children in America have dangerously high levels of lead in their blood streams. Children exposed to lead have a greater risk of fatal side effects than adults. Symptoms of lead poisoning start with flu-like symptoms, nausea, abdominal pain and can advance to anemia, kidney problems, weight loss, seizure, coma and death. High levels of lead exposure at young ages can also result in learning disabilities.

Send your Lead Poisoning claim to a lawyer who will review your claim at NO COST or obligation.
GET LEGAL HELP NOW

Lead Poisoning: Who is at Risk?

Lead has been used in gasoline, water pipes, and paint and is still used in many manufacturing processes and other common metal products, even toys. Lead can also be found in dust, soil or in your drinking water. Occupational exposure to lead is common among those working in law enforcement, plumbing, automobile repair, construction or mining. 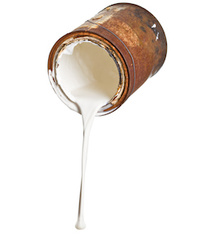 Lead poisoning has also been called plumbism or painter's colic since lead was often used in the production of plumbing pipes and paint until the discovery of its disastrous effects on health. In 1978, the Consumer Product Safety Commission (CPSC) banned the manufacture and use of lead-based paint in residential housing. Unfortunately, the ban did not require removal of lead-based paint from surfaces previously coated with this dangerous neurotoxin.

Unhealthy lead paint remains in approximately 57 million private housing units built and/or painted prior to 1980. The Agency for Toxic Substances and Disease Registry (ATSDR) has stated that corrective actions for these homes have been a complete failure but home owners and real estate brokers are required to inform a new home owner of the presence of lead-based paint or pipes. Like asbestos, lead paint and lead pipes can become dangerous once disturbed or removed. Lead cannot been seen, tasted or smelled.

Lead poisoning has been termed the "stealth disease" because of the way it occurs and the devastating neurologic damage it causes in children at doses that do not cause outward physical signs of poisoning.

Poisoning occurs when children eat tiny paint chips or inhale harmful leaded dust. Chalking lead paint creates dust that settles on toys and other objects. The dust is ingested by the young child in normal hand-to-mouth activity. Leaded house dust that is inhaled even in the smallest amounts is just as lethal as that which is ingested. One paint chip the size of a thumbnail, ingested by a young child, can cause permanent brain damage. Dr. John Rosen, a pediatrician responsible for treating lead poisoned children at Montefiore Medical Center in the Bronx, states: "Lead at remarkably low concentrations has the unique capability of robbing kids of such skills as reading, writing, concentration and abstract thinking. The set of things that are required for academic success and employment success can be lost forever, and all of that comes at a remarkable societal cost."

The difficulty of detecting lead poisoning means that blood lead levels are used to identify children with dangerous amounts of lead. In October, 1991, concluding a lengthy study, the federal government's Centers for Disease Control (CDC) redefined toxicity as blood lead levels at or above 10 micrograms per deciliter (mg/dL), the level at which some adverse health effects have been observed. No lowest threshold has been identified for the harmful effects of lead, although some studies have suggested harmful effects at levels even lower than 10 mg/dL.

Many experts believe that when a child's blood lead level exceeds 10 mg/dL, there is a high probability of permanent neurological damage. Even at these relatively low exposures, decreased intelligence, short-term memory loss, reading under-achievement, impairment of visual-motor function, loss of auditory memory, poor perceptual integration, poor classroom behavior, and impaired reaction time occur in children. Virtually every part of the body is affected by lead. Lead has no biological value and competes with metals that are essential to the body, such as zinc, iron and calcium. For example, lead interferes with bone formation by blocking absorption of calcium, which affects memory storage and the differentiation of cells in the nervous system. Lead is stored in the bone, matrix, and in pregnant women, this lead can be passed on to the unborn child.

Lead's effect on the brain results in less ability to store information and draw upon past information and less ability to inhibit responses to environmental stimuli. Lead also attacks the peripheral nervous system, which controls the muscles and organs outside the brain, causes decrease in muscle strength and at high doses, the syndromes of the wrist-drop and the foot-drop.

Lead accumulates in the kidneys, causing kidney disease and having far-reaching endocrinologic effects. There is a major impact on the enzymatic functions of the liver and on the immune system function of the spleen. It results in anemia by interfering with the synthesis of hemoglobin. Lead affects the reproductive functions of both men and women by interference with enzymes that process testosterone and other androgens.

How Do Children Get Lead Poisoning?

The terrible thing about childhood lead poisoning is that children get lead poisoned by "just being kids".

The leading medical and government authorities have concluded that children younger than four years of age are at the greatest risk for lead poisoning and its harmful effects. This is because infants in this age group have a tremendous amount of hand-to-mouth activity. They play on the floor and put their hands in their mouths. As they begin "cruising" and walking, they hold onto walls and window sills and put their hands in their mouths.

When there is chipping and peeling lead paint in a child's home, the tiny chips and leaded dust gets on their hands and into their mouths and the poisoning process begins. According to the National Center for Disease Control (CDC), lead paint is the predominant cause of childhood lead poisoning in the United States.

No matter what landlords and their insurance companies say, it is not your fault.

Some of the ways you can protect your children from the risks of lead poisoning in your home are:

The treatment for childhood lead poisoning, known as chelation, historically often involved a painful hospital procedure of injections that causes lead to be excreted in the urine. Recently oral chelation drugs have been developed which can be administered without hospitalization. Chelation procedures do not reverse damage already done to the body and it is thought that lead deposited in the brain tissue is not removed by this procedure. Further treatment requires careful clinical and laboratory surveillance of the child to ensure that there is not continued exposure.

Just as important in treatment of lead poisoning is removal of the source of the lead. The removal process can be an extreme danger in itself if the child is on the premises before removal of all traces of lead is accomplished. The increased paint chips and dust in the air and on the surface of floors, rugs, furnishings, and other belongings during removal can result in re-exposure and raise a child's blood lead levels above pre-chelation levels.

Chipping and peeling paint is the most common and dangerous source of lead for preschool children.

Lead from painted surfaces can enter a child's body completely undetected. This has been proven in scientific studies and, in everyday living, when parents, doctors and health agencies investigate the sources of lead a child has access to and how they become lead poisoned. Leaded paint naturally erodes to create a chalky dust and begins to chip and flake away from painted surfaces. The deteriorated leaded paint becomes part of the house dust and is inhaled by young children. The simple act of a child breathing in a leaded environment can begin the poisoning process. It is the reason why property owners and those responsible for property management and maintenance have a legal responsibility to keep their property free of chipping and peeling paint.

In 1978, the Consumer Product Safety Commission banned the manufacture and use of lead-based paint in residential housing. Unfortunately, the ban did not require removal of lead-based paint from surfaces previously coated with this dangerous neurotoxin. Today about 3 million tons of leaded paint remain in approximately 57 million occupied private housing units built prior to 1980. This represents approximately 74 percent of all such housing. Despite legislative efforts to preclude future use of lead-based paint, the Agency for Toxic Substances and Disease Registry (ATSDR) has stated that corrective actions have been a complete failure.

In addition to paint, several lead sources in the home can endanger young children. These include:

If you or a loved one has suffered from lead poisoning you may qualify for damages or remedies that might be awarded in a possible lead poisoning law suit. Please click the link below to submit your complaint.
Please click here for a free evaluation of your Lead Poisoning claim
Last updated on Jun-15-17

Pittsburgh, PA: A school district north of Pittsburgh is doing what it can to stymie and stem a lead poisoning class action lawsuit, making claims of precedent and holding the view that plaintiffs do not have standing to represent their children. Undaunted, lead poisoning lawyers representing the plaintiffs in Tait et al v. Butler Area School District et al., Case No. 2:17-cv-00182 in the US District Court for the Western District of Pennsylvania, view efforts by the defendants to toss the lawsuit as a standard legal maneuver, and nonetheless assert their lead or copper poisoning class action lawsuit will prevail.READ MORE
Class Action Lawsuit Over Lead in School Drinking Water

Butler, PA: At one time a staple of the manufacturing industry, lead has evolved from a common product found in everything from paint to children’s toys, to a known toxin, and the source of lead paint poisoning and other injuries to the nervous system and beyond. Thus, there’s little surprise that concerned parents would turn to the courts when lead was found in the drinking water of an elementary school in Pennsylvania, but were not informed for months, or so it is alleged.READ MORE
Lead Poisoning Still Happens