Although lead paint has been banned in the US since 1978, lead poisoning is still a common health problem in children. Exposure to even a small amount of lead in children can cause irreparable damage. Young children are most vulnerable to lead paint exposure because they are more likely to put paint chips or defective products such as toys containing lead into their mouths.

Send your Lead Paint Poisoning claim to a lawyer who will review your claim at NO COST or obligation.
GET LEGAL HELP NOW

Lead Poisoning: Who is at Risk 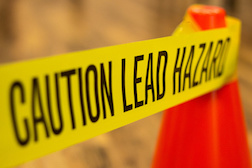 Of course anyone exposed to lead paint is at risk, but small amounts are especially dangerous to small children and pregnant women.

Since lead paint was banned and leaded gas was phased out, blood lead concentrations among US children declined exponentially, but children living or playing in or around a structure built before 1978 can potentially be at risk. In 2008 the National Safety Council estimated that 310,000 children under the age of six have too much lead in their blood and the US Department of Housing and Urban Development (HUD) estimated that about 38 million homes in the US still contain some lead paint.

More recently the American Academy of Pediatrics (July 2016) reported that too many children still live in housing with deteriorated lead-based paint and are at risk for lead exposure with resulting lead-associated cognitive impairment and behavioral problems. Researchers found that from 2007 to 2010, approximately 2.6 percent of preschool children, or 535,000 of children ages 1-5 had an elevated blood lead concentration.

The most common cause of lead poisoning in children in the US is the ingestion of lead dust from old house paint. Lead poisoning can occur when old paint chips and peels and results in paint dust, which can be inhaled. Renovations and remodeling activities in a home that contains lead paint can cause paint dust.

In the past decade many “toxic toys” imported to the US, mainly manufactured in China, were recalled after lead paint was found within them. For instance, Mattel in 2007recalled more than nine million toys in the US and a class action lawsuit was subsequently filed against the world’s largest toymaker. More recently Restoration Hardware recalled its metal top dining tables due to risk of lead exposure after receiving reports of elevated blood lead levels in four children who were exposed to the recalled tables.

Of course exposure to lead is not just from paint. Lead has been found in contaminated soil and water, and municipal water contamination in Flint, Michigan in 2016 proved to be deadly. But if your child has lead poisoning the most likely source is house paint. As well, furniture—such as the recent Restoration Hardware recall-- toys and other products can also contain contaminated paint. Food products, baby bibs, kid’s jewelry and toys, makeup and other products have been recalled due to high lead content.

Lead poisoning has been associated with a host of behavioral, learning, hearing and growth problems in children. Even low-level elevations in children’s blood lead concentrations can result in decrements in cognitive functions, including hyperactivity, reading and learning disabilities, lowered IQ and behavioral problems, as measured by IQ scores and academic performance.

Studies have shown that exposure to lead may cause damage to the nervous system, brain injuries, seizures, growth retardation, mental retardation, convulsions, coma and spontaneous death.

Historically, lawsuits filed against paint manufacturers have not been successful. But landlords and property managers can be held accountable for injuries related to lead paint exposure. Courts have also held toy manufacturers responsible for lead poisoning injuries.

In 2016 environmental justice and public health groups filed a lawsuit against the EPA. They asked a California federal court to update the agency’s standards for assessing dangerous levels of lead dust on surfaces in homes and residential buildings. According to the complaint, the EPA in 2009 agreed to update lead dust standards after scientific evidence showed that existing standards were inadequate for protecting children from lead poisoning. The news site Truthout reported that the EPA has yet to set new rules.

Back in 2007 a New York family with 19 children living in subsidized housing filed a lawsuit against the city, claiming they were not informed about the effects of lead poisoning. The City of New York agreed to pay the family $12.75 million. Rachelle Scott’s two children, three siblings and 14 nieces and nephews suffered permanent brain damage from lead poisoning.

If you or a loved one has suffered damages in this case, you may qualify for damages or remedies that may be awarded in a possible class action or lawsuit. Please fill in our form to submit your complaint to a lawyer for a free evaluation.
Please click here for a free evaluation of your Lead Paint Poisoning claim
Last updated on Mar-18-17