Yet Another Taser Death

Another senseless death by Taser occurred this past weekend; Nathan Vaughn's death was eerily similar to the Taser death of other men such as Robert Heston (February, 2005) and 24-year-old Keith Graff (October, 2005). All three men were Tasered over and over again and pronounced dead shortly thereafter. 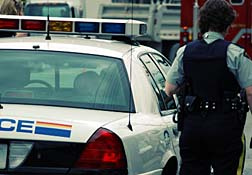 Nathan Vaughn was known to police—he had been arrested on several occasions for drug possesion, being under the influence and burglary. But no matter what crime was committed, it cannot justify being Tasered more than once.

Vaughn was shocked three times before a Sonoma County sheriff's deputy was able to handcuff him—shortly afterward Vaughn showed signs of medical problems. It is possible that, just like Heston and Graff, he went into cardiac arrest: an ambulance crew treated him on the scene but he was pronounced dead upon arrival at Kaiser Permanente Medical Center.

More TASER DEATH News
According to the sherriff's department, on Saturday morning Vaughn's mother called 911 and told the dispatcher her son was very violent, destroying the house and hitting his father, Ronald, who required medical attention after suffering multiple cuts and bruises. Apparently deputies had a call from the house the day before but they left without incident.

Because Vaughn's death happened while he was in custody of the sheriff's department, it is being handled by the Petaluma Police Department—another incident of the police policing themselves. How many Taser deaths will occur before the police realize that more than one Taser discharge can be lethal?

Tomorrow: an interview with Mr. Heston, whose son was killed by a Taser. The Heston family was the first to win a lawsuit against Taser International Inc.