Several recent studies have shown that residents who live within several miles of a factory farm can suffer significant health consequences including asthma, skin rashes, headaches and infections that are transmitted from animals to human beings.

Factory farms are large-scale farming operations, sometimes also called Concentrated Animal Feeding Operations (CAFOs). A typical factory farm consists of a series of low-slung buildings containing up to 30,000 hogs, chickens or other livestock. The majority of American livestock are now raised inside factory farms: according to the National Pork Producers Council, 80 million of its 95 million pigs killed each year come from factory farms. 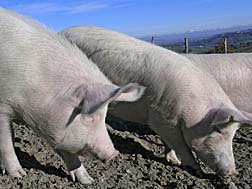 "Toxic and Inflammatory Effects"
A study in Iowa linked factory farms with a number of health problems. Researchers collected mental and physical health information by personal interviews from a random sample of residents living within two miles of a 4,000 sow operation. The information was compared to information from rural residents living in an area with minimal livestock production.

The study showed that "neighbors of the large-scale swine operation reported experiencing significantly higher rates than the controls of four clusters of symptoms that are known to represent toxic or inflammatory effects on the respiratory tract. These clusters of symptoms have been well documented among swine confinement workers."
Symptoms reported include: cough, shortness of breath, chest tightness, wheezing, nausea, dizziness, headaches, runny nose, burning eyes, musculoskeletal aches, skin rashes and fevers.

The study confirms the research of the U.S. Centers for Disease Control and Prevention (CDC). The CDC has been documenting the impact of chemical, bacterial, and viral compounds from animal waste in the air, soil and water surrounding factory farms.

Environmental Science Conference
As a result of these and other findings, an Iowa City conference brought together environmental scientists from around the world to address major environmental health issues associated with factory farms. Expert workgroups convened to compare research on respiratory health effects, air toxics, water quality issues and the specter of pandemics, such as influenza outbreaks from locating industrialized poultry and swine production in proximity to each other and to humans.

More News
The conference report states: "The results of the increasing intensity of livestock operations have been regionally higher levels of air contaminants and increased problems with contamination of surface waters with animal waste".

"Potential impacts on human and environmental health from long-term inadvertent exposure to [these contaminants] are a growing public concern."

Are You Affected by a Factory Farm?
If you live or work within several miles of a factory farm, you may be at risk for asthma, animal-to-human infection, allergic or inflammatory conditions, and other health consequences. If you are experiencing symptoms that may be related to factory farm exposure, speak to your physician. You may also have legal redress: a qualified lawyer can best assess your options.