With the onset of new technologies comes the possibility that new a new breed of telecommunications lawsuit will emerge. These new media lawsuits have come about after consumer complaints regarding new media and telecommunications platforms, including the electronic book reader known as Kindle. 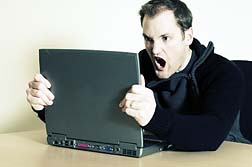 Amazon, the maker of Kindle, now faces multiple lawsuits regarding not only the Kindle itself, but also how Amazon manages the Kindle and user accounts.

One lawsuit was filed in July, according to an article found at online.wsj.com (July 15, 2009), and alleges that a Kindle 2 reader developed cracks within a few months of purchase. Furthermore, the lawsuit alleges that the Kindle's screen freezes and that Amazon customer service told the plaintiff that the company would repair the screen freeze but not the cracks in the screen. Amazon maintains that the cracks are caused by consumers improperly opening the Kindle's cover. The cover is made by Amazon and the cracks allegedly appear where the cover attaches to the device.

The plaintiff says he was told he would have to pay $200 to repair the device. He further alleges that his wife was told by a customer service representative that the cracks are a common problem. The lawsuit seeks class action status and estimates that damages could exceed $5 million.

Following the lawsuit's filing, Amazon announced that it will replace Kindles that were cracked by Amazon's cover.

More MEDIA-TELECOMMUNICATIONS LAWSUITS News
Meanwhile, Amazon faces a lawsuit filed by two high school students, who say the company went into users' Kindle readers via the Internet and deleted copies of George Orwell's "1984." One of the plaintiffs, Justin Gawronski, says he was reading the book for his advanced-placement senior English class but when Amazon deleted "1984" it also made his notes regarding the book useless. Any references that he made to specific paragraphs and pages were gone, replaced with a string of characters that were useless to the student.

The lawsuit seeks class action status and alleges that "Amazon violated [The Computer Fraud and Abuse Act] by intentionally accessing Plaintiffs' Kindles, protected computers, without authorization," according to latimesblogs.latimes.com (July 31, 2009). The lawsuit also claims that Amazon breached the terms of its contract with customers.

Amazon has said that "1984" was mistakenly sold. The company said a third party added the books to the catalog but that third party did not have the rights to the books.

The first Kindles were available for sale in November 2007. The device allows consumers to read books, magazines and newspapers provided through digital means.