On its products page dated January 29, 2009 Sanofi-Aventis Canada Inc., the maker of the antibiotic Ketek (telithromycin) acknowledges "Spontaneous cases of toxic epidermal necrolysis (TEN) and Stevens Johnson syndrome (SJS) have been reported; however, a causal association between the administration of Ketek and development of SJS and TEN has not been established." Yet many patients have taken Ketek and soon after developed SJS/TEN, and one woman died. 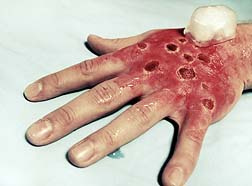 Ketek has had a rocky history. To begin with, the FDA was slow in approving the drug due to fraudulent clinical trials. In 2004, it was approved to treat everything from bronchitis to sinusitis, but mainly based on 5 years of sales in Europe. Just months after its approval in the US, Ketek claimed its first victim: a patient died from liver failure after taking the antibiotic for a mild respiratory tract infection.

The FDA was accused of allowing fraudulent data to be used in the approval process and a criminal investigation, along with Senate hearings followed.

By the end of 2006 a panel of FDA advisers recommended severe restrictions on Ketek. The FDA removed two of its approved uses (bacterial sinusitis and chronic bronchitis) and slapped a black box warning on the drug.

In early 2007, a Canadian woman was diagnosed with toxic epidermal necrolysis (TEN), a more severe stage of SJS, after taking Ketek. Allegedly, Sanofi-Aventis was "considering" a change on its label that would warn potential consumers and physicians of other side effects such as SJS and TEN that causes hundreds of deaths each year.

More SJS KETEK News
Still, SJS was not added to the list of contraindications on the Sanofi-Aventis website. Given the number of people who have suffered a severe allergic reaction to Ketek and developed SJS/TEN, including one death, and given the flawed clinical study, the drug company may want to do the right thing and change its Ketek label again to warn about SJS/TEN. Is the drug company not informing the public about the association with Ketek and SJS because it fears a drop in sales?

Mainly as a result of the Ketek mess, the FDA section that handles antibiotics "is one of, if not the most, difficult, environments to work in at the agency right now," according to Patrick Ronan, a former FDA chief of staff who now consults for health care companies.

If you have suffered losses in this case, please send your complaint to a lawyer who will review your possible [SJS Ketek Lawsuit] at no cost or obligation.
Request Legal Help Now