More KETEK SJS News
Basketball legend Manute Bol was hospitalized earlier in the month after being diagnosed with kidney failure and Stevens Johnson Syndrome (SJS), according to an insider report. 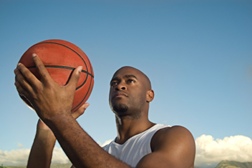 The 7'7" former center for the Washington Bullets was traveling in his native Sudan, where he was taking part in a charitable effort to build a school in collaboration with Sudan Sunrise. During the several months that Bol traveled through the African nation, his health began to deteriorate, prompting him and long-time friend Tom Pritchard to rush back to the States, where Bol was admitted to a local hospital.

In an interview with the Washington Post, Pritchard mentioned that Bol is currently undergoing dialysis treatments but may have to be moved to a burn unit to treat his SJS.

SJS is a serious condition of the skin and subcutaneous tissues that causes lesions to develop in the mucous membranes and large portions of the skin to fall off. It is believed that SJS is the result of an allergic reaction to antibiotics like Telithromycin, also known as Ketek.

If you or a loved one have suffered losses in this case, please click the link below and your complaint will be sent to a drugs & medical lawyer who may evaluate your Ketek SJS claim at no cost or obligation.
Request Legal Help Now