Cindy's first "outbreak" occurred after she was prescribed Ketek for a mild form of pneumonia. The back of her mouth and her throat were covered in blisters and her doctor diagnosed oral herpes. Then she broke out it in shingles and now has cysts near her groin. Cindy believes she was misdiagnosed; likely because her doctor has never seen or treated a case of Stevens Johnson Syndrome (SJS), which is usually caused by an allergic reaction to a drug such as Ketek. 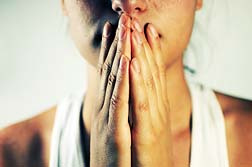 "Not only did I feel degraded when my doctor said I have oral herpes," says Cindy, "I am afraid to see him again for these cysts because he will probably say I have genital herpes. I have never had skin conditions like these and it is too coincidental that these outbreaks happened right after I took Ketek. Even if his diagnosis is correct, my doctor is treating the symptoms and not the cause; during these "outbreaks" I had the sense to realize something more was going on so I have documented and photographed everything…"

The antibiotic Ketek (also called telithromycin) is a very dangerous drug. It has been linked to liver injury, liver failure and death, myasthenia gravis (a neuromuscular condition) and now, the French drug manufacturer Sanofi-Aventis recognizes its link to "skin events".

On its website, Sanofi-Aventis states that " Spontaneous cases of toxic epidermal necrolysis (TEN) and Stevens Johnson syndrome (SJS) have been reported; however, a causal association between the administration of KETEK® and development of SJS and TEN has not been established."

However, on its consumer information label, one of the serious side effects (right under liver damage) is " Allergic reaction with symptoms such as swelling of the mouth, throat, hands, difficulty in breathing or swallowing, itching, rash, red spots and blisters." On the same page, under the heading "Serious side effects, how often they happen and what to do about them" it states the following: "If you think you are having an allergic reaction or if you have a skin reaction such as itching, swelling or red spots and blisters, stop taking KETEK® and call your doctor or go to a clinic."

A Canadian woman suffered SJS/TEN (toxic epidermal necrolysis ) after taking Ketek and the drug maker is now discussing with Health Canada whether to strengthen the existing warning about allergic reactions. Adding this warning is a good thing and in doing so, Sanofi Aventis could save countless lives. But in the meantime, it is still putting profits over people; many consumers (and some doctors) have no idea that Ketek is associated with SJS and will continue taking the drug if they are not informed of the side effects. More than 65 medications are now known to cause a SJS or TEN reaction in consumers—Ketek is one of them.

There are three things you can do to protect yourself from an allergic reaction to a medication:

More SJS KETEK News
1. When you are prescribed a new medication, read the prescribing label for any "WARNINGS" or "ADVERSE EVENTS"; if possible, spend a few minutes to research the drug online.

2. Know your medical history. Have you ever had an allergic reaction to a medication? Tell your doctor, no matter how insignificant it seems.

3. Talk to family members about any allergic reactions they have had. Often, the symptoms of SJS are misdiagnosed. Researchers believe some people are predisposed to severe reactions such as SJS and TEN. (For example, patients with Asian ancestry may be at greater risk for SJS when taking Carbamazepine and other antiepileptic drugs.)

Prevention can go a long way, and it could go further if drug companies do the right thing and inform the consumer about the potential association with its medication and SJS.