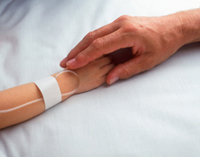 A Pennsylvania jury's ruling that Johnson & Johnson must pay $10 million in damages to the family of a girl who suffered severe side effects from taking Children's Motrin is similar to a previous case involving Ketek and Stevens-Johnson Syndrome.
Read [ Motrin Case Similar to Ketek SJS Link ]

On its products page dated January 29, 2009 Sanofi-Aventis Canada Inc., the maker of the antibiotic Ketek (telithromycin) acknowledges "Spontaneous cases of toxic epidermal necrolysis (TEN) and Stevens Johnson syndrome (SJS) have been reported; however, a causal association between the administration of Ketek and development of SJS and TEN has not been established." Yet many patients have taken Ketek and soon after developed SJS/TEN, and one woman died.
Read [ Ketek SJS: Not Enough Warning ]

Cindy's first "outbreak" occurred after she was prescribed Ketek for a mild form of pneumonia. The back of her mouth and her throat were covered in blisters and her doctor diagnosed oral herpes. Then she broke out it in shingles and now has cysts near her groin. Cindy believes she was misdiagnosed; likely because her doctor has never seen or treated a case of Stevens Johnson Syndrome (SJS), which is usually caused by an allergic reaction to a drug such as Ketek.
Read [ SJS Ketek: Manufacturer to "Discuss" adding further Warning about "Skin Events" ]

Ketek—What is it Good For? Absolutely Nothing!

When it comes to Ketek, the FDA has proven yet again that it is incapable of policing the drug industry. The antibiotic ketek has been linked to potentially lethal side effects, from liver failure to Stevens-Johnson Syndrome (SJS). Although several SJS ketek cases have been reported, the drug maker Sanofi Aventis is only now "discussing" whether to strengthen the existing warning about allergic reactions to include the potential for "skin events", meaning SJS.
Read [ Ketek—What is it Good For? Absolutely Nothing! ]

The 'Skinny' Over Ketek and Stevens Johnson Syndrome

It's a condition that would remind you of the worst horror movie. Bleeding from the eyes. Skin sloughing from flesh. Like a severe burn from a fire, but there is no burn, or fire. This is Stevens Johnson Syndrome (SJS) and its more severe cousin, Toxic Epidermal Necrolysis (TENS). And it has been linked to various drugs, including Ketek.
Read [ The 'Skinny' Over Ketek and Stevens Johnson Syndrome ]