They are the workhorses of the aviation industry, designed to go where fixed-wing aircraft can't. But for all their maneuverability helicopters are not infallible, and any news of a helicopter crash is met with horror.

There have been many high-profile helicopter crashes over the years that have caught the public's attention and empathy through the media—and sometimes those incidents happen to the media itself. Last year a horrific, mid-air collision between two television news helicopters attempting to cover the same unfolding story were carried as breaking news by their own affiliates. Many broadcasters had tears welling up in their eyes at the thought of valued colleagues with whom they shared a coffee that morning, now entrapped in the hulk of a downed news chopper. 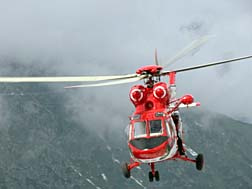 Who among us will ever forget the tragic deaths of actor Vic Morrow and two child actors after a location shoot for the movie 'Twilight Zone' went horribly wrong in 1982? The doomed trio was on the ground, shooting a nighttime scene in the water with a helicopter hovering low overhead, when a series of pyrotechnic explosions forced the helicopter to spiral out of control, slamming into Morrow and the two children with frightening ferocity. There was no hope for any of them.

Nor was there hope for the young man walking home from the corner store last winter, earphones on his head as any teenager would wont to do, when a helicopter in distress above crashed into him as he walked along a quiet residential street. He was just strolling along, when a helicopter dropped on top of him and engulfed him in a huge fireball.

And of course, earlier this summer when nine people lost their lives in a helicopter crash in California, the thought was not lost on many that while flying in any aircraft carries some risk, the firefighters who had just been risking their lives fighting a massive fire 215 miles northwest of Sacramento would have been forgiven for thinking the most dangerous part of their day was behind them.

However, fate would play them a cruel hand when the Sikorsky S-61N helicopter, carrying a full load of fuel, lifted off from a remote clearing, struck a tree and slammed into a hillside before erupting into flames. On board were ten firefighters, two pilots and a US Forest Service employee. They were being shuttled back to base camp after a grueling day. They never made it. Nine people died, and were so horribly burned that officials expected to require dental records and DNA to identify the victims.

Of the four who survived, two were firefighters. It is also known that among the survivors was the pilot. All suffered cuts, severe burns and broken bones. Investigators from the National Transportation Safety Board (NTSB) were dispatched to the crash site in a remote, heavily treed area northwest of Junction City, about 70 miles west of Redding. The British-made black box from the cockpit of the chopper owned and operated by Carson Helicopters of Grants Pass, Oregon was in the process of being analyzed for clues as to the cause of the crash.

The helicopter crash in California August 5th was the worst involving firefighting aircraft since 1972, according to the National Interagency Fire Center in Boise, Idaho. That year, seven firefighters lost their lives in a crash at Los Padres National Forest.

A spokesperson for the Center suggested in media reports immediately after the crash that "fatalities involving aircraft are rare." Ken Palmrose went on to say, "I've flown a lot of helicopters and they've all been really safe."

It is not yet known if the crash was caused by pilot error or if atmospheric dynamics caused by the intense heat may have had a role to play in the loss of control by the pilot.

It should be noted that a similar helicopter operated by the same company crashed and burst into flames during a logging operation in Tennessee in 2003, killing the pilot and injuring the co-pilot. Investigators blamed the crash on the malfunction of a component that was overdue for repair, and the fact that the pilot was flying too low.

More HELICOPTER CRASH News
The helicopter involved in the California crash has been described as a military-style Sikorsky S-61 capable of carrying water, or fire-retardant chemicals for dropping operations. The helicopter is also designed to shuttle passengers and supplies, but is not designed to do both operations concurrently. The downed Sikorsky was rated for 15 passengers—13 were on board—and carried a full compliment of fuel at the time of the crash.

It is not known if it was carrying any water or chemicals that would have added to, and possibly exceeded the weight restrictions. Investigators said weather and visibility were not a factor—which is, to assume, that the tree into which the Sikorsky slammed must not have been obscured by smoke.

The investigation, and the potentiality for lawsuits, continues.

If you have suffered losses in this case, please send your complaint to a lawyer who will review your possible [Helicopter Lawsuit] at no cost or obligation.
Request Legal Help Now