A 29-year-old Army staff sergeant died last week in a helicopter crash that occurred on a Navy ship off the coast of Virginia. 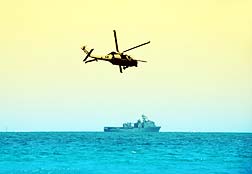 James Stright, who was known to family members as J.R., was killed in the helicopter accident that also injured eight other service members, the Billings Gazette reports.

More HELICOPTER CRASH News
The staff sergeant was a member of the East Coast naval special warfare unit that was on board the Black Hawk helicopter when it crashed on the ship. According to naval officials, the service members in the helicopter were rappelling down a rope to the USNS Arctic when the helicopter crashed into the vessel.

The exercise was reportedly done to help soldiers practice boarding, searching and seizing ships that may be under the control of pirates or terrorists.

Jerilyn Stright, the sergeant's mother, told the Gazette that her son was known for his humor and smile, and that he liked to hunt and fish after school.

"His entire adult life was dedicated almost exclusively to the military," Jerilyn said. "He existed for it."