One Dead in Helicopter Crash 'Fireball' North of Toronto 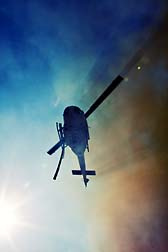 In this case, according to an account appearing this morning in the Toronto Star, the helicopter that crashed was a small, privately-owned aircraft with a single occupant that crashed in the early evening near Heritage and Embleton Roads south west of Brampton, a suburb of the Metropolitan Toronto corridor.

The helicopter crash occurred in an apple orchard and was reported to Peel Regional Police just after 8pm last night. Peel Regional Constable Jodi Dawson told a Toronto Star reporter that the flight originated from the Toronto Island Airport.

"We are still trying to ascertain who the owner of the helicopter is…" Dawson said.

"George said there was a huge fireball that lit up the sky," said Ferri, who saw the crumpled wreckage. "You could tell there had been quite a fire."
Ferri said his brother, Jim, who lives across the road, had watched the helicopter's navigation lights track across the darkened sky.

"He said it was going along and just dropped" out of the sky, he said.

The CBC reports this morning that Drew Walkham and some friends were playing poker when they heard "a huge bang and the house started to shake.

More HELICOPTER CRASH News
"One of my buddy's brothers came running and said he saw a helicopter crash. So we all ran out and about 50 feet away from the house there was all these flames, so we all grabbed flashlights, our fire extinguishers and I tried to put out as much of the flame as I could," Walkham told a reporter from the Canadian Broadcasting Corporation.

"We attended the area and located a crash site, which is just off Heritage Road, 20 feet off a residential driveway," said Constable Jodi Dawson.

"There was one male deceased. He was the pilot of the helicopter. The helicopter was a small privately owned helicopter," she said.

The victim of the fiery helicopter crash has not been identified. The CBC reports that Transportation Safety Board investigators remain at the scene north of Toronto.