Helicopter accidents are never easy to hear at the best of times—but helicopter crashes involving medical helicopters are the worst, as they involve patients who have already suffered. Now, helicopter accident news has included the revelation that there have been so many downed aircraft, that medical personnel are starting to balk at flying. 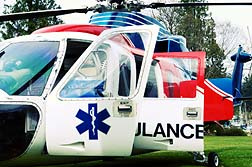 At least, that's the suspicion in Maryland. "I'm concerned right now that there are some patients that should be flown to trauma centers that are not," said Dr. Douglas J. Floccare, aeromedical director of the state emergency medical system, in comments published in the Baltimore Sun. "There's some skittishness out there."

A September 27, 2008 crash of a medical helicopter that killed four people and critically injured a fifth—one of the patients—appears to be serving as the basis of all the concern. With regard to the latter crash, which occurred in Prince George's County, a medical helicopter was dispatched to aid the two victims of a car crash. Once airborne, the helicopter encountered dense fog and was redirected to Andrews Air Force Base. It was cleared to land at 11:55pm, but never landed. Air traffic controllers lost contact with the helicopter two minutes later, and the helicopter crash happened just before midnight.

The chopper went down in Walker Mill Regional Park, hundreds of yards from the nearest road and six miles from the hospital.

The lone survivor was Jordan Wells, whom rescuers surmise can attribute her survival to a door that must have sprung open as the helicopter hit trees, and her stretcher must have slid out. Investigators have concluded that given the damage to the helicopter, the aircraft and the survivor likely slammed into the ground separately. The helicopter was severely crushed. The pilot, the on-board paramedic, an EMT nurse, and Wells' friend and fellow passenger in her wrecked car and thus also a patient en route to hospital, were all killed.

Since the crash, flights to Maryland's trauma hospitals have abated to a pace of about 1,600 a year since the September 27th crash. That's down from 4,100 patients the year before.

Still, there are those who feel that patients have been transported to hospital by air in the State of Maryland too readily, before a patient's injuries are accurately assessed. To that end a physician based in Nevada, Bryan Bledsoe, has published a series of papers in medical journals questioning the frequency, and appropriateness of helicopter transport. Bledsoe was part of an expert 7-member panel convened to examine the circumstances surrounding the September 27th medical helicopter crash, and Maryland's protocol for such flights.

For example, panel member John A. Morris Jr., a trauma surgeon from Vanderbilt University, questioned whether the State of Maryland puts too much emphasis on transporting patients to trauma centers quickly. At issue was the State's dictum that suggests a patient must reach hospital within an hour of injury. The latter is known as the 'Golden Hour' philosophy, and Maryland's emergency system is largely regarded as a national model.

However, concern was raised over Maryland's heavy use of helicopters for patient transport, and the possibility that transport helicopters were not appropriately used. For example, it was reported that the decision to transport the two young women to hospital by air ambulance was largely based on the condition of their wrecked vehicle, and not from a review of their apparent injuries.

Dr. Morris made the point that the concept of getting patients to a trauma center as quickly as possible has never been validated through scientific evidence.

Thus, was the use of the helicopter necessary in this case? It has been reported that the two occupants of the wrecked car were complaining of neck pain, suggesting a neck injury. But was a helicopter transport necessary, or would a land transfer have sufficed? Four people might be alive today, and injuries received in the car wreck paled in comparison to the injuries received in the helicopter crash. The survivor lost part of her leg.

More HELICOPTER CRASH News
The tragic September crash has already fostered one change in protocol. Previously, ambulance crews had the capacity to call for a helicopter themselves based on written protocols designed to predict the presence of injuries not yet apparent. Now, the Maryland Institute for Emergency Services Systems mandates that ambulance crews consult with a hospital prior to calling in air transport for patients without obvious injuries.

A reduction in necessary helicopter flights for patients can only aid in the reduction of helicopter accidents, and helicopter crashes impacting individuals already suffering prior trauma. To be sure, helicopter accident news involving injured patients is hard to take. But what's even more difficult to fathom is the possibility that a flight might have been unnecessary. Four people might be alive today, and a fifth would never have lost her leg.

It is not known if the Wells family plans to sue.