It's a sad commentary that doing a simple search engine query for helicopter crashes—dated today—and you get literally dozens of pieces of helicopter accident news. Some people die horrid deaths in helicopter accidents. Some, like the increasing prevalence of medivac crashes, are heartbreaking for the injured patients who have already suffered enough. Others escape with their lives. 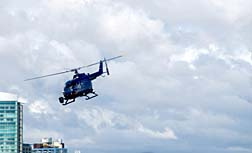 The question remains, however—what's up with helicopters, and why do they seem to be coming down in record numbers?

Paul Kasprzyk, who goes by the name Paul Cavenaugh on the air, is a traffic reporter for WFTL Radio and WPEC TV-12 in West Palm Beach, Florida. Kasprzyk and his pilot Takayuki Tanaka were just beginning their daily traffic run, reporting on the morning rush hour from the skies above Florida on Veteran's Day, when the intrepid reporter noticed that the 'check engine' light had come on.

It's unnerving enough when you're in a car, with rubber on the road. But when you're high in the sky over a darkened city with nothing but power lines below, it's downright frightening.

A mechanic on the ground reported seeing the rotors on the Bell Ranger III stop spinning, which thrust the aircraft into an instant trajectory closer to the ground.

Under more forgiving circumstances it is assumed that the pilot would have had an easier time landing the helicopter and avoiding a helicopter accident had he been blessed with the opportunity to simply pick a safe spot to put down and get to terra firma as fast as he could. However, the combination of early-morning darkness and a network of power lines camouflaged by the blackness made that task much more challenging, and greatly increased the risk.

"We'd be in a lot better shape if we didn't have to avoid those power lines," Cavenaugh told the radio station. Tanaka, "did a good job. At that time of the morning, it's like 6:30, so it's really dark and not a lot to see," Cavenaugh said.

In the end, the pilot used the chopper's spotlight to guide them towards the ground and through the maze of power lines, according to an account in the South Florida Sun Sentinel, out of Fort Lauderdale. The attempt to maneuver the helicopter around several power lines caused it to crash, and it went down hard.

The good news is that both men survived, and no one on the ground was hurt. Given what could have happened (and indeed, what has happened to others), it's a miracle the helicopter accident ended the way it did. While both men were hurt, their injuries were not life threatening and they both walked away from the downed helicopter under their own power, investigators said.

"It was a phenomenal landing. Amazingly, the pilot was able to set it down without touching any power lines," said Stephanie Slater, a police spokesperson, in comments published in the Sun Sentinel.

Tanaka is a pilot with Palm Beach Helicopters, based at the Lantana Airport in South Florida. It is assumed that the station's traffic helicopter was either leased to them, or provided as a service.

More HELICOPTER ACCIDENT News
Traffic, and news helicopters are a common sight over the skies of major metropolitan centers, and some flights have ended badly. In 2004 WNBC's Chopper 4 crashed into a series of buildings in Brooklyn. The crew of three was injured, but survived the dramatic crash.

However, the occupants of two news helicopters in the airspace over Phoenix, Arizona in the summer of 2007 weren't so lucky. The two choppers were covering a breaking news story from the air for competing television stations when they collided in mid-air.

If you have suffered losses in this case, please send your complaint to a lawyer who will review your possible [Helicopter Accident Lawsuit] at no cost or obligation.
Request Legal Help Now