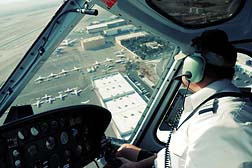 Regarding the collision of 2 medical helicopters, the NTSB found that one pilot erred by not contacting the nearby medical center's communications center, while the other pilot took an unusual approach to the medical center after dropping off a medical crewmember at a local airport to reduce weight on the helicopter. If he had used a more typical approach to the airport, it is more likely that the other pilot would have seen him coming and had time to take action to prevent a mid-air collision.

The helicopter collision occurred on June 29, 2008, approximately one quarter of a mile from the Flagstaff Medical Center. Neither helicopter showed signs of structural, engine or system failure.

The FAA does not require helicopters be equipped with systems to avoid traffic collisions. "Had such a system been on board, the Board noted, it likely would have alerted the pilots to the traffic conflict so they could take evasive action before the collision," the NTSB's report says. "However, according to Federal regulations, ultimately the pilots are responsible for maintaining vigilance and to be on alert and avoid other aircraft at all times."

Evidence suggests that neither pilot had any idea the other was in the area as both were likely focused on landing their aircraft.

"This accident highlights the importance of adhering to the regulations and guidelines that are in place," said Acting Chairman Mark V. Rosenker. "Had these pilots been more attentive and aware of their surroundings, and if communications would have been enhanced, this accident could have been prevented."

A spokesman for Classic Helicopter Services, operator of one of the helicopters involved in the collision, said that although it knew that there was another helicopter dropping off a patient at the medical center, its pilot was not notified because it is impossible to predict arrival times of different helicopters. Furthermore, the company said that it was not required by law to let the pilot know about the other aircraft.

Meanwhile, a lawsuit has been filed following the January 4 crash of a Sikorsky S-76C. The helicopter allegedly crashed in a swamp while carrying Shell contractors to an oil platform in the Gulf of Mexico. Eight contractors died in the crash. According to the lawsuit, the original windshield was replaced with a lightweight cast acrylic windshield, which was what the plaintiff claims caused the crash.

More HELICOPTER CRASH News
The plaintiffs claim Sikorsky is liable for the crash because it failed to warn about the dangers of replacing windshield and marketed the helicopter as safe when it was not. The lawsuit, filed on behalf of one of the victim's children, claims loss of companionship and society, loss of inheritance and mental anguish. The suit seeks unspecified damages, interest and other relief. Named as defendants in the lawsuit are the helicopter's pilots, owner and manufacturer.

If you or a loved one has been injured in a helicopter crash, it may be wise to contact an attorney to discuss your legal options.