“I’ll Never Get Used to This Zimmer NexGen Knee”

Frank had a Zimmer NexGen knee replacement in March 2012 and has had nothing but problems with it since, including a near-addiction to the Fentanyl patch. “My girlfriend has seen me cry from the pain this knee replacement has caused and my surgeon just says I will get used to it,” he says. “I will never get used to it.” 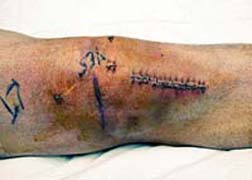 Frank, age 46, was a commercial electrician: he hasn’t worked since the knee replacement surgery. “I can barely keep my balance so going up and down a ladder isn’t going to happen,” he says. “Just lying in bed and lifting my leg will cause my knee to pop out and the pain is almost unbearable.”

Getting a knee replacement in your early 40s was almost unheard of about 20 years ago: the typical hip and knee patient used to be about 70 years old. In Frank’s case, he played a lot of sports, broke his leg and blew out his knee at the same time. But the fastest-growing age group for knee replacement surgery is between 45 and 54 years of age - and this age group has grown by almost 200 percent in the past 10 years for a number of reasons. Getting a knee replacement is supposed to reduce pain and allow you to become more active again, but that isn’t the case for many Zimmer knee patients.

Frank’s Zimmer knee implant was a problem even during surgery - something his orthopedic surgeon wouldn’t discuss with him during the follow-up appointment. “I was told the surgery would take two hours but it took all day,” he explains. “According to my surgeon’s notes (I have my medical reports), the surgery went smoothly but I was in hospital four days and after that I went to a nursing home for two weeks for rehab. When I got out, they sent a physical therapist to my house and she said because I was walking each day I didn’t need her help. But I did need help: even in the hospital I complained that something wasn’t right because I was in so much pain.

“And it got progressively worse. I went back to the surgeon for a follow-up and told him how it kept popping out of place but he said that it would ‘get better’ and I would ‘get used to it.’ He just gave me a prescription for pain and told me to come back in a year. But I couldn’t wait a year. I have been to University of Penn hospital because my knee kept folding inwards, it kept popping out and I would literally have to kick it and snap it back into place. But they couldn’t do anything because Medicaid wouldn’t cover a revision surgery.

“Then I found out that my knee is on a Zimmer NexGen recall list. It has been recalled since 2010, and Zimmer notified doctors and hospitals that they had a defective product. I have my medical report that says I have a Zimmer NexGen manufactured in 2010, but I don’t have the serial or lot number.”

More ZIMMER NEXGEN News
Added to Frank’s frustration, he hasn’t been able to contact the surgeon for the yearly follow-up appointment. Frank says the surgeon is no longer practicing at the hospital where he had the surgery and his office won’t even return his calls. Instead Frank saw his family doctor. “He said I need x-rays first and then an MRI to find out if indeed this Zimmer NexGen knee is defective,” says Frank. “Unfortunately, Medicaid won’t cover any further tests and I can’t afford them because I’m out of work.

“I have had problems with my knees for more than 20 years but nothing like this. I will stand from a sitting position and it will buckle; it will give out on me and there is no place to go but down - I literally hit the ground.

“I’m getting by without the pain meds but I’m not doing much. If not for my girlfriend, I would likely be back home with my parents. I have thought about contacting Zimmer directly and asking them to fix my knee; in return, I will sign anything they want. I don’t care so much about the money if I get involved in a Zimmer knee lawsuit, I just want my life back. If my replacement knee was defective when it was put in, they should be held accountable.”