"I Want Others to Realize the Potential Danger," Says Zimmer Natural Knee Recipient

Twenty years ago, Jane fell on the tennis court and blew out her knee. She tried every kind of physical therapy until her doctor said nothing further could be done except get a knee replacement. So Jane had a Zimmer Natural knee replacement in 2008, and she hasn't had a good night's sleep since. 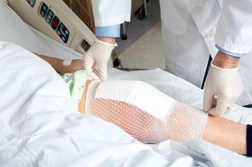 "I'm not the type of person to give up and I still play tennis a little but I refuse to get my other knee replaced after this experience," says Jane. "And I'm not intending to make money from a lawsuit, I don't want anything. I just want people to realize the potential dangers of having a knee replacement: chances are, it will not be pain-free. And the dangers of infection are very real."

Jane, age 60, says her knee still swells and the pain is constant; it never stops aching and constantly wakes her at night. She doesn't know for certain whether her Zimmer natural knee is defective, but at the same time, she doesn't understand why it isn't getting better. In fact, it is worse than before the replacement.

And to top it off, Jane got an infection post-surgery. "About four weeks after surgery, I started to get warts or boils all around my knee," she says. "They said it was a reaction to the internal stitches and that went on for a few months; it was really disgusting. Luckily, I'm over that, but the pain is always present.

"I think one reason for the pain is from all the scar tissue caused by the infection. My surgeon said I can get a knee arthroscopy—he can go back in and scrape out the scar tissue—but I think it will probably make my knee worse because the typical reaction to any invasive treatment is to make more scar tissue—it's a vicious circle.

"I had the complete knee replacement, even the knee cap. I don't think my doctor did anything wrong and I know he has replaced hundreds if not thousands of knees, but I don't know how many Zimmer Natural devices he has implanted.

More ZIMMER NATURAL News
"I figure that as each body part wears out, they just can fix it then I can get rehab and move on. But I do think a lot of people are getting knee replacements that don't need it. Why get a new knee when you are 85? Or when you are 40? I held out for 20 years before getting a knee replacement, and at least I am thankful of that decision."

Posted by
Janet Evans Webb
on April 9, 2012
I too have suffered above and beyond what I was promised with my initial left knee replacement on November 12, 2010, only to have a manipulation a month later. I moved to a new doctor early the next year (2011), had another manipulation upon finding out my first knee replacement was three degrees off and would not stop hurting, the pain was more than I could handle; and the swelling prohibited me progressing in my rehab. I could not walk correctly despite rigourous therapy. By July of 2011, my new doctor recommended a revision with complete knee replacement on the same knee. My therapy continued and settled to a 90 plus degree range of motion. My doctor, unhappy with my outcome manipulated my knee in September, 2011 to which I awoke screaming uncontrollably. Throughout the two replacements, therapy and manipulations I have been dramatically reduced from receiving the one pain medication that helped me. I also suffer from spinal and severe osteoarthritis and fibromyalgia, My doctors failed to set up proper follow ups and I do not carry a card with a new x-ray of my new knee, which still swells. Despite repeated requests I have not received a new card to carry. Like others my other knee uninjured by damaged by carrying the load for my replaced knee will eventually require injections. I have been damaged yet in Texas I have been told by new doctor that he would do nothing to support any action taken by me against my originial surgeon. This is the wild west out there with surgeons cutting and failing to provide proper follow up. My overall health has declined and required three blood transfusions. I will not have any other joints replaced, until the rogue replacement industry and its surgeons are regulated and required to answer for their mistakes. My mental health has been called into question, simply because of the extreme pain I suffer. These surgeons are cutters and not able to understand the on going and long lasting ramifications of their work. I am 50 years old and face years of suffering. I tell everybody to endure what they can and to avoid replacements at all costs. Patients are suffering and we are getting no help, except from other specialists who are trying to help us handle arthritis and pain. Peace and blessings of comfort to all.
Posted by
Jim A Barnes
on April 9, 2012
I HAD BOTH KNEES REPLACED. ONE IN 2007 AND THE OTHER IN 2009. I HAVE CONSTANT PAIN AND THE RIGHT KNEE HAS BEEN SWOLLEN SINCE THE OPERATION. I'VE TALKED TO EIGHT DIFFERENT LAWYERS AND EVERY DAMN ONE OF THEM SAID ABOUT THE SAME THING " DONT FIT THE CRITERIA.BUT NOT LIKE YOU ,SOME ONE SHOULD HAVE TO PAY, IF NOT A SETTLEMENT BUT SOME THING. I'VE BEEN HURTING FOR OVER FIVE YEARS, AND IT WILL NOT GET ANY BETTER..I HAVE MORE PAIN NOW ,THEN I HAD WITH THE ARTHRITIS.
AFTER THE FIRST SURGERY (LEFT KNEE) THEY LEFT THE STAPLES IN TOO LONG AND THE SKIN HAD GROWN AROUND THEM, AND THEY HAD TO BE CUT AWAY( A THREE O'CLOCK IN THE MORNING..BUT THE SCAR IS ONLY ABOUT AN HALF AN INCH WIDE.. THE RIGHT KNEE,THEY TOOK THE SATPLES OUT TOO SOON,AND I NOW HAVE A SCAR THAT IS ALMOST TWO INCHES WIDE.I HOPE YOU UNDERSTAND MY PROBLEM ?
Posted by
Cyndi Mitchell
on April 9, 2012
My husband had both left and right knees (total replacement) done in April and Sept. 2004. His right knee has been fine but he has had nothing but problems with the left one. They are both Genesis II from Smith & Nephew, Inc.

Right now, he is battling an infection that started in September 2011 when he had his left kneecap scraped out to remove some spurs and bone growth and to realign the kneecap. He had this previously done to the right knee (2010) with no problems. Since Sept 2011, he has had 5 surgeries on the left knee in which one was a Revision Surgery. He still has the Temporary in.

In November, they put in a pic line and starting in December, they injected antibiotics into him on a daily basis. This went on until January. The pic line was removed in March and he was scheduled for surgery on March 19th. During that surgery, the Temporary was removed, cleaned, and then pit back in. They also flushed the area to remove as much of the infection (that was still there) as they could. The doctor put the Temporary back in because he said it was senseless to put a new knee in with the infection still being present.

He is in terrible pain and is having to take several medications to control it (somewhat) plus, once a week he goes into the hospital to have his blood checked for the presence of the infection and he is taking 2 different antibiotics by mouth now-I'm pretty sure that he has built up an immunity to them by now. He still has to have the Temporary replaced...on several occassions, he's asked the doctor to just "cut it off"! I'm concerned that he is becoming hooked on the pain meds because he has to take so much of them just to get a little relief.

If you can at all help it, don't get this type of surgery done. He had been a Diesel Mechanic for over 35+ years and was constantly have to crawl around or be on his knees 8 to 12 hours a day. He is 60 now. I'm also concerned because he also had both hips replaced in 2007 and 2010 - Oxinium, also from Smith & Nephew, Inc. I sincerely hope he doesn't start having problems with them.