Were you looking for DePuy ASR Hip lawsuits?

The Zimmer Durom Cup is a newer type of hip replacement component, made with a single piece of material. Since it was introduced to the US market in 2006, the cup has been used for total hip replacement (known as hip arthroplasty) in more than 12,000 patients, but many individuals have reported severe pain and the need for additional hip surgeries after having the Zimmer Durom Cup hip replacement implanted. According to the manufacturer, doctors reported post-hip surgery problems "requiring revision" 5.7 percent of the time. In other words, at least 684 patients may require additional hip surgeries after having a Zimmer hip replacement. Some patients have also experienced problems with the Zimmer NexGen CR-Flex knee replacement component.

Send your Zimmer Durom Cup claim to a lawyer who will review your claim at NO COST or obligation.
GET LEGAL HELP NOW 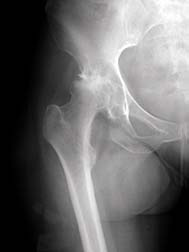 In July 2008, after reviewing data on more than 3,000 cases, Zimmer, the world's largest manufacturer of hip replacement parts, suspended sales of the Durom Acetabular Component (Durom Cup) until it can update the label with instructions about special surgical techniques to be followed during total hip replacements.

Because the Indiana-based manufacturer says it did not uncover evidence of any manufacturing defect or design defect, a recall was not issued.

Class action and individual lawsuits have been filed against Zimmer Holdings Inc., claiming it failed to provide proper warnings, instructions and training to surgeons.

In April 2008, Dr. Larry Dorr, a prominent orthopedic surgeon, wrote an open letter to members of the American Association of Hip and Knee Surgeons complaining of Zimmer Durom Cup problems: of 165 Zimmer Cup implants he performed, 14 were "revised or required revision" within the first two years after surgery. Dr. Dorr indicated that the Cup was defective: the fixation surface on the cup was problematic and a circular cutting surface on the periphery of the cup prevented it from fully seating.

One month later, Zimmer sent a letter to healthcare providers indicating they were initiating an investigation into the complaints of Zimmer Durom Cup complications, which led to the suspension of sales in July.

According to a 07/30/10 report in The New York Times Zimmer blamed the problem on Dr. Door's technique and provided the FDA with information indicating that the hip replacement worked as intended. The FDA investigation was then closed.

In July 2010, Senator Charles E. Grassley (R, Iowa) asked Zimmer Holdings to provide information about how it handles complaints about product problems from medical consultants and how it tracks long-term performance of its devices. The request was made after a 06/20/10 article in The New York Times, which outlined two disputes between Zimmer consultants and the device maker—both of which involved consultants claiming there were problems with Zimmer products. In both cases, Zimmer reportedly blamed the technique used to implant the device for the failure.

Zimmer responded to Grassley's request saying it "welcomed the opportunity" to speak with Grassley.

Zimmer advises patients who have received the Durom Cup to contact their doctor if they experience pain more than three months after surgery.

The image is unsettling: the ghostly X-ray of an artificial hip, with the cup still mounted in place to the bone, and the prosthetic ball grossly dislocated and floating well above and beyond where it should have been. The pain and debilitation to the patient, needless to say, is palpable. Little wonder that both studies and prevailing opinion suggest that new-age artificial hips, such as the Zimmer hip, are not all they're cracked up to be.READ MORE
Zimmer Inc. Earns Profit despite Costs of Zimmer Hip Lawsuits

While there may still be Americans walking around (if they can even walk) with a problematic Zimmer hip, the company that makes the allegedly defective product appeared to have a banner year in 2011, according to a recent Associated Press (AP) report.READ MORE