Abigayle was only 36 when she had a massive heart attack -- the last thing she ever expected. "My cardiologist said it didn't make any sense; there was nothing wrong with my arteries but one had collapsed," says Abigayle. "I was in perfect health and I wasn't on any meds, except for Zelnorm."

"I started taking Zelnorm in June, 2006 for irritable bowel syndrome and had a heart attack six months later," says Abigayle (not her real name). "I have never had any health issues so this came right out of the blue. 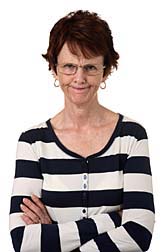 "A few nights before the attack, I was watching a disturbing movie with my friends and I had a sensation that caused me to clutch my chest but there was no pain. It didn't feel like an anxiety attack either -- I just felt a distinct sense of danger but didn't know why.

I was exhausted for the next few days. I went back to work on Monday but stayed home on Tuesday. I started to vacuum and got the feeling again. This time I called Telehealth -- an Ontario Nurse's Hotline. 'Has any family member die of a heart attack?' she asked. 'No', I answered. They listened to all my symptoms and strongly advised me to see a doctor -- sooner than later.

I took a big gulp. I watched myself throughout the day and went to work that afternoon. By the time I got home, I felt awful. My husband drove me to the hospital but they said I was probably coming down with the flu. I took a hot bath and right away I had a searing pain from my neck that radiated into my jaw. I had incredible pressure and pain in my chest;. I leaned forward to escape it but couldn't. Then it went down my left arm and I knew I was in serious trouble.

Luckily my husband was in the bathroom with me. I remember not being able to think, my brain wasn't functioning. I told him we had to go back to the hospital. Turns out, my own doctor was there on call. She did a battery of tests and determined it wasn't my heart or lungs. The ECG showed nothing.

I started to question myself: was I having a panic attack? I was feeling rather stupid. At 2.15 am my doctor came into my room in ER and asked me to tell her again what happened. She said that my heart enzymes were elevated and I could have possibly had a heart attack. The next evening my husband and our five kids visited and the pain came back, so I spent a few more days in hospital before I was sent to another hospital where they ordered an angiogram. By this time my heart was beating erratically. My cardiologist looked at the results and stood back, absolutely shocked.

'You have cardiovascular disease,' she said.

What did this mean? Will I die at 40 and what about my kids, age 5 to 12? I had to live, I have 5 kids! My cardiologist said she had no idea what could cause it and this type of disease was mainly seen in young men on drugs!

Two months later, still on Zelnorm, I was admitted to hospital again -- it happened again. But this time I was ordered to discontinue the drug. I called my doctor and asked why I had to stop taking it. That was when I found out that there was a warning not to take the drug if you have a pre-existing heart condition. I never took another tablet again.

Within days after discontinuing Zelnorm, my heart stopped pounding and I thought I was miraculously healed. Amazingly, I still didn't link my heart attacks to Zelnorm! But just three weeks ago, I was listening to a radio show and a naturopath was talking about a drug to improve skin. I called in and asked if you could take this with heart meds -- which I was now on. Instead she asked questions about my heart attack.

She hinted that I should investigate the meds I was taking. It still didn't register but then I went online and typed in Zelnorm. The FDA warnings -- released March 30 -- immediately popped up. I sat there in shock. But I was also relieved to have an answer instead of thinking that my body had given up on me. Can you imagine the emotion I felt, knowing my heart attack was triggered by an external force?

It was relief but I also felt intense grief at this unnecessary loss. I can't play with my kids the way I used to. Everything depends on whether my heart can take it.

I haven't been angry yet -- that is coming.

'Finally I know what happened to me,' I told my husband. We called our lawyer and he said we should file a complaint at LawyersandSettlements.com.

If you or a loved one has suffered a heart attack or stroke after taking Zelnorm, please contact a lawyer involved in a possible [Zelnorm, Canada Lawsuit] who will review your case at no cost or obligation.
Request Legal Help Now