History repeated itself earlier this week when a West Virginia mine operated by Massey Energy Company exploded, killing 25. In 2006 a fire in the Aracoma Alma Mine (also owned by Massey Energy) caused the death of two miners, and in 2009 Massey subsidiary Aracoma Coal Company pleaded guilty to 10 criminal charges and reached a wrongful death settlement. Mine Safety and Health Administration (MSHA) officials warned Massey that it had a "potential pattern of violations" back in December 2007. 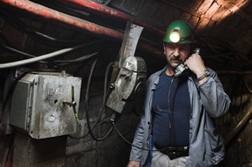 The 2006 disaster occurred when a conveyor belt in the Aracoma Alma Mine caught fire and bellowed smoke into the fresh air passageway that the miners were supposed to use for their escape. The MSHA and the West Virginia Office of Miners Health, Safety and Training (WVOMHST) found high quantities of combustible accumulations along belt conveyors that caused the two miners to die of carbon monoxide poisoning. Their widows filed a lawsuit against Massey, claiming the company "personally engendered a corporate attitude of indifference and hostility towards safety measures which stood in the way of profit." The lawsuit was settled in November 2008 for an undisclosed amount. Massey was also fined $2.5 million and was ordered to pay $1.7 million for violations.

On April 5, 2010 an explosion occurred 980 feet underground at Massey's Upper Big Branch mine. It could have been avoided if Massey heeded the violations and officials had acted sooner. The MSHA government citations and orders issued for the Upper Big Branch mine more than doubled last year to 515. According to the New York Times, however, officials of the mine safety agency say they were bound by the current regulations that require them to issue warning letters, and that if companies successfully reduce their rate of violations by 30 percent, they would not be found to have a pattern of violations. Before last week's deadly explosion, officials said they were considering tightening the regulations.

More WRONGFUL DEATH News
On April 6, Jeff Gillenwater, spokesman for Massey Energy Co, said the search for survivors at the Upper Big Branch mine had been called off. The cause of the accident hasn't yet been determined, but mine safety experts said explosions are typically caused by high levels of methane produced during longwall mining. Mining companies try to dilute the chemical with ventilation systems, but Massey repeatedly violated this requirement.

Click to learn more about LawyersandSettlements.com
LawyersandSettlements.com - A trusted, independent legal news provider bringing quality news and information on all legal cases and lawsuits filed in United States of America to its readers since 2002. Over 250,000 legal help requests including Employment Law Cases, and Personal Injury Cases have been forwarded to lawyers all across to the country.