A deadly explosion yesterday afternoon at a coal mine in West Virginia left 25 miners dead and four missing. Search and rescue efforts are underway to free the trapped miners, but are hindered by the presence of poison gases. 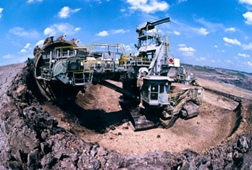 The explosion occurred underground on Monday afternoon, at Massey Energy Co's enormous Upper Big Branch mine, located just 30 miles south of Charleston. It was caused by methane gas trapped below the surface of the mine. Massey reportedly has a history of violations for improper ventilation of highly combustible methane at its mine sites.

Rescue workers are currently trying to drill 1,000 feet below the surface to free the remaining trapped methane to prevent the risk of further explosions and facilitate finding the missing miners.

But the situation does not look good. While the rescuers initially thought they could start drilling within 12 hours of the blast, it now appears that the drilling won't be complete until Wednesday evening.

"The odds are long against us, it's tough," Gov. Joe Manchin told NBC's "Today Show."

More Fire Accident News
"All we have left is hope, and we're going to continue to do what we can," Kevin Stricklin, an administrator for the federal Mine Safety and Health Administration, told NBC and AP news services. "But I'm just trying to be honest with everybody and say that the situation does look dire."

Two miners who survived the blast did manage to get out of the mine. They were on a vehicle that was taking them out of the shaft at the time of explosion. Seven other miners on the truck died. A total of 29 miners were in the area at the time of the explosion, which occurred during a shift change.

The force of the explosion was so intense that it twisted the local railway tracks like pretzels, Gov. Manchin told reporters. This explosion is the worst mining disaster to happen since 1984, when 27 miners died in a fire at a mine in Orangeville, Utah.

Click to learn more about LawyersandSettlements.com
LawyersandSettlements.com - A trusted, independent legal news provider bringing quality news and information on all legal cases and lawsuits filed in United States of America to its readers since 2002. Over 250,000 legal help requests including Accidents, Employment Law Cases, and Personal Injury Cases have been forwarded to lawyers all across to the country.