Veteran attorneys Bob Hilliard and Steve Berman were already preparing to file a wrongful death lawsuit on behalf of victims of the Orlando gay nightclub shootings on June 12, 2016. 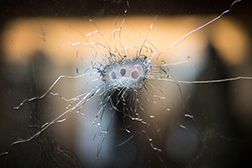 The slaughter of five law enforcement officers three weeks later in Dallas, Texas, by a man armed with a military-style assault weapon, has only deepened their resolve that assault-style military weapons able to kill dozens of people in minutes “have no place in America” as Hilliard says.

“When it affects the folks that are supposed to protect us and they become victims of the same crazy idea that assault rifles should be legal, it drives home the point that no one is safe,” says Bob Hilliard, the founding partner of Hilliard Muñoz Gonzales LLP in Corpus Christi, Texas.
“It is just a matter of luck and time until every single person is affected or killed by an assault rifle.”

Hilliard has joined with attorney Steve Berman, from the firm of Hagens Berman Sobol Shapiro LLP of Seattle and Boston, to represent families of the victims of the Orlando gay nightclub shooting. The gunman, heavily armed with an AR-15 military assault rifle and a Glock handgun, killed 49 people and wounded 51 others.

“More than half of the mass shooters in the United States used assault weapons and high-capacity magazines, guaranteeing the highest kill rate in the shortest period. Yet, manufacturers have not yet been held to account for their design and marketing decisions.”

The lawsuit, will name Sig Sauer, the makers of the AR-15 and other military-style weapons, and Glock Inc., the makers of the Glock handgun, as the defendants, and is expected to be filed within the next 10 days, if not sooner, says Hilliard.

“Gun manufacturers annually sell more than $15 billion in arms and ammunition. We will rely on the judicial system to begin to treat Big Slaughter no differently than any other US industry. The law is that if you intentionally build and sell an unreasonably dangerous product for profit, you can be sued and must answer to a jury for the damages caused by that product. This is the bedrock of our judicial system, applying to every manufacturer of any product made. Guns are not, and should not be, any exception. The idea that Big Slaughter could be above the law is mind-numbing,” says Hilliard.

Congress did pass a law protecting gun manufacturers from litigation in cases where their weapons are used to commit crimes. However, Hilliard and Berman believe there are circumstances in the Orlando nightclub shootings that would provide grounds for legal action.

“One of the Orlando victims had three small children,” says Hilliard. “The lawsuit prohibition against gun manufacturers makes an exception for minors who have a claim. So there is a negligent entrustment claim against the gun manufacturers in Orlando.”

Furthermore, one of the victims was a Mexican national and Hilliard argues that “He can make a claim under the Alien Court Claims Act. It says a cause of action exists if international law is violated by the cause of the alien’s injuries.

“When you survey the world you see the United States is in the extreme minority in allowing its citizens to legally own military-grade assault rifles,” he adds.

More WRONGFUL DEATH News
In addition, Hilliard says that Sig Sauer, the maker of the AR-15 assault rifle, aggressively markets its product as a deadly killing machine. Quoting from Sig Sauer’s promotional material, Hilliard points out that the company catalog advertises that its weapons offer “battle tested experience to engineer the world’s toughest most devastatingly accurate pistols and rifles.”

Sig Sauer’s MCX assault-style rifle enables the shooter to spray a large number of bullets over a broad killing zone, without the need to aim at each specific target, with detachable ammunition magazines that can hold as many as 100 rounds.

“I am almost speechless to consider the consequences now of law enforcement officers being victimized as mercilessly as civilians have been. Perhaps they will stand together and tell the assault rifle manufacturers that is enough,” says Hilliard.

Click to learn more about LawyersandSettlements.com
LawyersandSettlements.com - A trusted, independent legal news provider bringing quality news and information on legal cases and lawsuits filed in the United States of America to its readers since 2002. Over 650,000 legal help requests including Personal Injury Cases, and Criminal Law Cases have been forwarded to lawyers all across to the country.