A truck driver in Virginia who was injured on the job and denied workers compensation benefits finally saw the case settled in his favor following mediation. 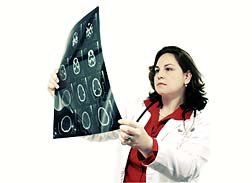 On December 21 Virginia Lawyers Weekly reported on an unidentified truck driver whose delivery truck broke down on US Route 50 in Loudoun County Virginia in September 2005. The driver managed to pull his truck off the road and park it just past the entrance to a business owned by the defendant in the case.

While the driver waited for help and worked in the back of his truck as directed by his employer, a large flatbed pulled out of the defendant's property, turned right, and rammed the plaintiff's vehicle. The force of the impact caused the plaintiff to tumble over his truck's console and come into contact head-first with the windshield.

The accident aggravated a pre-existing neurological condition that was mostly asymptomatic before the accident. The plaintiff had no idea he had a brain defect, but he began experiencing severe headaches, facial numbness, ringing in his ears, difficulty swallowing, gagging, blurred vision, confusion, problems with speech, low back pain and weakness and pain in his arms and legs. He also sustained herniated discs at L4-5 and L5-S1 and developed post-traumatic lumbar disc disease at those levels.

The plaintiff initially dismissed hospital treatment, but underwent an MRI at the urging of his chiropractor. The rare Chiari Malformation brain anomaly was finally identified, and, given the worsening of his condition, the plaintiff was immediately called off the road for treatment. Emergency surgery proved unsuccessful. The plaintiff underwent three more surgeries at the Chiari Institute in New York in an attempt to correct and arrest his condition.

More WORKERS' COMP News
The plaintiff was initially denied workers compensation benefits and his attorney dropped the case. New counsel took up the plaintiff's cause and eventually won a settlement following mediation.

The plaintiff was awarded $2.5 million.

If you have suffered losses in this case, please send your complaint to a lawyer who will review your possible [Workers' Comp Lawsuit] at no cost or obligation.
Request Legal Help Now