Tylenol Side Effects Could Include Asthma in Children Prenatally Exposed

A recent study published in the April issue of Clinical and Experimental Allergy Journal indicates that Tylenol side effects could include the development of asthma in children who received prenatal exposure. 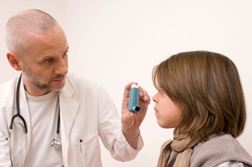 WPVI, a local ABC affiliate, reports that the potential link between prenatal Tylenol use and childhood asthma has received a significant amount of attention from researchers over the past few years.

When combining the results of six studies on the topic, researchers found that prenatal exposure to Tylenol (acetaminophen) was associated with a greater incidence rate of children between the ages of two-and-a-half and seven suffering from persistent wheezing.

Still, the authors of the latest study say that more research needs to be conducted before an actual conclusion can be reached on the potential effects of prenatal exposure to Tylenol, according to the news source.

According to the National Center for Biotechnology Information, some side effects that have been experienced by people taking Tylenol include nausea, rashes, fatigue and flu-like symptoms. Tylenol overdoses have also been linked to damage to the liver.
READ ABOUT TYLENOL/ACETAMINOPHEN LAWSUITS