Ken E. is not sure if Trasylol was used in his wife's surgery. He is trying to get that information, but admits that anything to do with his wife's death is very painful, so finding out whether or not she was given Trasylol has been pushed aside.

In January 2006, Ken's wife had a heart attack. She recovered well enough that she was able to have triple bypass surgery done in March. However, she died after multiple heart attacks on May 31, 2006. 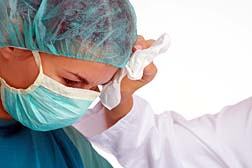 "There was no function whatsoever," Ken says. "After the surgery, they never had it under control. She had to be on dialysis two to three times a week following that bypass. Then she wasn't feeling well for three to four days. She went in [to the hospital] and they tried to put a chest tube in her but she was bleeding inside. She passed away in the ICU."

Like so many other people who have lost loved ones after open heart surgery, Ken does not know for sure if his wife was given Trasylol during her surgery. This is one of the major problems with Trasylol. Many people were unknowingly given the drug to prevent the need for blood transfusions during open heart surgery. Now, many of those patients are suffering from kidney failure and other serious problems because of the use of Trasylol.

More News
Based on those findings, the risks of Trasylol are far greater than the benefits. After all, who wants to take a drug when their chances of surviving are far better if they are not given a drug at all? Most people would likely rather take their chances with excessive bleeding than take Trasylol and risk kidney failure and possible death.

If you or a loved one had open heart surgery and suffered kidney failure or other serious side effects, Trasylol may have been used during the surgery. A lawyer can help obtain your medical records to determine if you have been harmed by the use of Trasylol. Patients are currently investigating lawsuits against Bayer, alleging the company knew about the risk of kidney failure and death associated with Trasylol but did not properly warn the medical community about those risks.