Two years ago this month Joe Randone died after receiving Trasylol for a heart operation. We should never, ever forget him—because there are as many as 22,000 people just like him.

Consider how many people that number really represents: an entire town, or the capacity of a large stadium. Imagine seeing that stadium filled with 22,000 people. 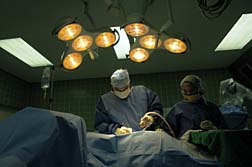 Then, in the next picture, imagine seeing that stadium empty. That's what Trasylol has allegedly accomplished, through Trasylol side effects. Thankfully, the vilified drug is no longer being actively marketed—pulled from the mainstream after a Canadian study had to be halted when too many aprotinin (Trasylol) participants were dying. But it's still out there, available and in use on a case-by-case basis. And some doctors have made the case for the retention of Trasylol, given the drug's effectiveness to control bleeding during surgery. For some patients, the risk of blood loss supersedes all others—even those brought to the fore with the use of Trasylol, it seems.

Thus, it has not been banned and Bayer AG, the makers of Trasylol, has adopted a wait-and-see approach while the data associated with the Canadian BART trial is endlessly studied.

But that doesn't help the family of Joe Randone, or the families of the other 21,999 people just like him. He and they represented the price of waiting two years for the US Food and Drug Administration (FDA) to take definitive action. This, in the face of mounting evidence and a collection of red flags that have been flapping in the breeze since as far back as the 1980s.

But it was the two years encompassing 2006 and 2007 that have remained the focus. That's the period during which researcher Dennis Mangano released his exhaustive observational study that concluded Trasylol was dangerous, with a suggested death toll of as many as 1000 per month. There were other studies revealing similar conclusions, one of which was funded and sponsored by Bayer itself—only to withhold the study from the FDA, due to a grievous error they say, right before a pivotal hearing to discuss the merits of Trasylol.

Since then, the accusations and the lawsuits have been flying. The drug companies are greedy and evil, critics say. The FDA is grossly under-funded, ineffective, or hops back and forth between the back pockets of Big Pharma. The critics have been having a heyday, and the citizenry is not impressed: within 72 hours of airing the 60 Minutes story on Trasylol this past February, the CBS website logged 14 pages of comments before the network closed the floodgates.

And since then, not much new. Bayer AG is still studying. The FDA is still waiting. And Joe Randone is still, and will forever be, lost to his loved ones and friends.

We should never forget Joe Randone. Although he suffered from a heart murmur since birth, it was a minor annoyance. The 52-year-old was happy and relatively healthy when he checked himself into a hospital on New Years Eve 2005 for what everyone thought would be a routine heart valve replacement. Yes, there could be complications, his surgeon acknowledged to his family. There is the potential for complications with every surgery. But this procedure, in spite of the risks, was considered routine and the risks low.

For Joe Randone and his family, it was anything but routine. Immediately after surgery the otherwise hale and hearty 52-year-old man suffered two heart attacks. His kidneys failed. His eyes were sewn shut to protect his corneas. His gal bladder was removed. His legs were amputated due to poor circulation.

In all, he endured 19 operations and months of pure hell before he finally passed away in August of 2006. In his notes after the initial surgery, his doctor wrote: "Aprotinin-induced graft thrombosis."

Aprotinin is Trasylol. And there are 21,999 people just like the late Joe Randone who are, like him no longer in this world, with potentially similar entries in their charts.

More News
What have we learned from this? CBS reporter Scott Pelley, who was the point man for the 60 Minutes expose back in February, posed this question to the eminent researcher, Dennis Mangano:

"Doesn't a drug have to be proven safe before the FDA allows it on the market?"

"No," Mangano replies. "The trials that are constructed before a drug is marketed and given approval to be marketed generally address effectiveness of the studies."

"Make sure I understand. If the FDA is not certifying a drug as safe, before it goes on the market, what is it doing?" Pelley asks.

"It's certifying," Mangano says, "that the drug is effective and that within the small numbers studied, relatively small, it doesn't appear to be unsafe."

And a man who l lost his kidneys, gall bladder, legs and ultimately his life allegedly due to Trasylol is proof that the system, such as it is, does not work.