Trasylol: In Their Own Words

The world by now knows all too well that Trasylol has all the hallmarks of a blockbuster movie—perhaps even with Tommy Lee Jones as the crusading researcher, Dr. Dennis Mangano. And the thousands of patients who died from Trasylol heart failure, Trasylol kidney failure and various other Trasylol side effects might finally get their due as the workings of a manufacturer, and a drug regulator are examined.

You can imagine the dialogue that might ensue. Only in this case, the dialogue need not come from scriptwriters putting words into the mouths of actors. Rather, the voice would come from actual accounts, descriptions and testimonies from the real players themselves. 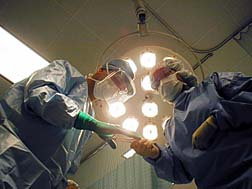 It would be a riveting movie:

Dr. Juergen Fischer would have a part. Here's a guy who was aware that Trasylol was available in Germany as early as 1959, and that a suspicion amongst top German researchers that aprotinin (Trasylol) had the potential for causing kidney problems as early as the 1970's. Fischer presented his concerns during a Bayer-sponsored symposium in Luxembourg in 1984. At the symposium, dubbed 'New Aspects of the Trasylol Therapy', Dr. Fischer said:

"It turned out that this would remain the only critical contribution. Within the session attended by all participants, great interest was shown in my presentation, so I believed to have given good reasons for clinical studies to be initiated. Later I spoke on different occasions to colleagues working at clinics, but the further development is well known: German clinics predominantly issued publications in favor of Trasylol, sometimes with a small remark that nothing significant was found concerning the kidneys. And in the publication of all the lectures of the symposium almost every evaluation and warning of my lecture had been deleted.

"In spite of this, the publication includes your conclusion 'when using high dosages of Aprotinin with already damaged kidneys and particularly when reducing the temperature, the renal function should be closely supervised'. Hence the dangers of Trasylol (Aprotinin) for the renal function was already known and published for a long time?

"Contrary to the allegations of the Bayer company, at least since 1984 many German heart surgeons as well as those responsible for this drug were aware that studies on animals published by various authors from 1970 to 1984 had shown massive side effects of Trasylol upon kidneys. What could be a better proof than a conference book published by Bayer itself?"

Dr. Dennis Mangano is the respected researcher who did an exhaustive, observational study on Trasylol:

"Given our findings, especially with regard to serious renal events among patients undergoing either primary or complex surgery, and given the cost of aprotinin therapy, which is at least 10 times that of aminocaproic or tranexamic acid, we estimate that considerable global health care savings would accrue if aprotinin were replaced by either aminocaproic acid or tranexamic acid. Specifically, extrapolating international-use patterns, we estimate that for renal complications alone, the replacement of aprotinin with aminocaproic acid would prevent renal failure requiring dialysis in 11,050 patients per year, yielding an indirect savings (from the saved cost of dialysis) of more than $1 billion per year, in addition to direct savings (from reduced drug costs) of nearly $250 million per year. Replacement of aprotinin with tranexamic acid would prevent 9790 complications necessitating dialysis each year, yielding similar direct and indirect savings.

"In conclusion, the observed association between aprotinin and serious end-organ damage indicates that continued use is not prudent, whereas the less expensive generic medications aminocaproic acid and tranexamic acid are safe alternatives."

Eight months after receiving Mangano's findings, the US Food and Drug Administration (FDA) convened an expert panel to debate Trasylol. Bayer was in attendance, including Dr. William R. Hiatt, chairman of the panel who Mangano noted had produced several papers underwritten by Bayer. He also claimed that 3 panelists had to sign waivers acknowledging financial interests in drug companies.

"The whole thing was a set-up. We did not have anything to gain financially by this. We were making an observation about safety. The system is ridiculous. It's all pro-industry. Who's protecting the patient?"

Cut to Bayer representatives at the panel discussion, and now to a flashback where Bayer has commissioned and receives a study of its own that agrees with Mangano's own findings. However, the study is not brought forward at the meeting. Several panel members lament the lack of additional data, but Bayer remains silent.

Dr. Michael Lincoff, panelist: "At no point did the Bayer folks say, 'It's on its way.'"

Finished your popcorn yet? Please don't leave the theatre until you see this flashback scene of Dennis Mangano, in the fall of 2006—a year BEFORE Trasylol was pulled.

"We estimate that over the past year, aprotinin was prescribed worldwide to at least

More TRASYLOL News
200,000 cardiac surgery patients having a profile similar to patients in our study. For such patients, our study found a 5 percent absolute increase in 5-year mortality (1 percent per year for 5 years) associated with aprotinin use, compared with either aminocaproic or tranexamic acid use. Thus, in 2006 alone, had aprotinin been replaced with either of these generic agents, we estimate that approximately 2000 deaths per year for the next 5 years (or 10,000 total deaths) might have been avoided.

"The association between aprotinin and long-term mortality indicates that serious safety concerns extend beyond the perioperative period. Therefore, continued use of aprotinin in this population does not appear prudent, given that safer alternatives—aminocaproic acid and tranexamic acid—are available."

Indeed, a movie worth making—and a story that needs to be told as a constant reminder of a sorry time in the pharmaceutical history of a nation…