The Trials and Tribulations of Trasylol

Trasylol heart failure, and the sad state of affairs behind the Trasylol story serves to paint a grim picture of the US pharmaceutical industry, and the regulators who are supposedly watching over it. Meantime, Trasylol kidney failure and various other Trasylol side effects are still an issue—that's because Trasylol was never banned. Bayer AG, the Trasylol manufacturer, simply agreed to stop actively marketing the drug. But there is no ban and no recall. The barn door is still open. 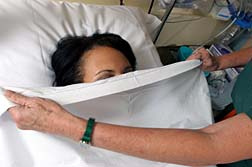 Meantime, the lawsuits keep coming. Two plaintiffs from Illinois are seeking more then $2 million from Bayer, claiming that Trasylol produced acute renal failure, and led to the death of one of the plaintiff's spouses.

The Trasylol story is the stuff of pharmaceutical legend. Some might argue that you couldn't make something like this up. But it happened.

The US Food and Drug Administration (FDA) approved Trasylol in 1993 as an aid to surgeons, and their patients at greatest risk of blood loss during CABG surgery. While the drug carried certain risks—as do most drugs—it was felt that given the likelihood of complications from severe blood loss in high-risk patients during surgery, the ability to mitigate bleeding was considered to be of sufficient benefit to outweigh any risk.

However, the risks were starting to alarm some researchers, especially with regard to heart attack and kidney difficulty. Various studies were suggesting that such risk was even more pronounced than that present when the FDA gave the nod to Trasylol in 1993.

Those concerns, it seems, never came out. Instead, Bayer is said to have ramped up the lobby effort to the FDA to have Trasylol approved for even more types of surgeries. At a reported cost of $1,000 per dose, Trasylol was well on its way to becoming a $1 billion dollar drug for Bayer.

Enter Dr. Dennis Mangano. The eminent California-based researcher spent years painstakingly conducting an observational study of Trasylol, and concluded that Trasylol was not only dangerous, it was killing people. He was also mystified why such an expensive drug was used to control bleeding, when there were at least two other alternatives that had been around longer—and hence had a better track record, and far less risky than Trasylol. And, at about 50 bucks a dose, a helluva lot cheaper.

Mangano published his findings in early 2006, and the FDA organized an expert panel to debate the merits of Trasylol some months later. Bayer, the Trasylol manufacturer, had in the meantime quietly ordered it's own observational study in an effort to either verify, or dispute Mangano's findings.

At the FDA hearing, in September of 2006, Mangano painstakingly dissected his findings, and urged that Trasylol be banned. However, the observational study is not the so-called gold standard of a clinical trial. That issue, coupled with a lack of any co-oberating evidence, caused the panel to dismiss Mangano's findings and clear the way for Trasylol to continue. Some members of the FDA panel lamented, in the presence of Bayer personnel, the absence of any additional research.

Unbeknownst to the panel members but apparently known by the manufacturer's representatives in the room, the Bayer-funded observational study had come in, with findings that mirrored Mangano's.

The report was never submitted to the FDA panel. A week after the panel broke, the Harvard researcher Bayer had hired to do the observational study blew the whistle to the FDA. Bayer cited the matter as a grievous oversight, and two employees were disciplined. It is not known if the FDA censured Bayer.

Bayer finally issued warnings about Trasylol December 15th, 2006. That was too late for Joe Randone, a fifty-something New Yorker who went in for routine heart surgery New Years Eve in 2005. He never came out of hospital. In a rapid decline of his health, the once-hale Randone suffered several heart attacks, his kidneys failed, he lost both of his legs to infection, and at one point had his eyelids sewn shut to protect his corneas. He lasted until the summer of 2006, when he finally died in hospital.

Randone served as a poster boy, if you will, for a CBS 60 Minutes report last February, on the trials and tribulations of Trasylol.

With all this information now a matter of public record, the FDA scheduled another panel discussion for September of 2007—during which the Bayer-funded observational study was presented (a year late), together with Mangano's findings. By now, Mangano was claiming that Trasylol was taking 1000 lives per month.

The writing appeared to be on the wall for Trasylol. And still, incredibly, the FDA gave Trasylol a reprieve, determining that the benefits of the drug still outweighed the risks—and in the absence of a gold-standard clinical trial that carried more weight, than the observational variety.

But there was a clinical trial going on—in Canada. The BART trial was comparing the effectiveness of Trasylol against the two alternative drugs Mangano had identified in his report: drugs that carried far less risk, and dramatically less cost.

In the fall of 2007 the BART trial had to be stopped, as too many of the Trasylol participants were dying.

That was enough for Bayer AG to finally pull Trasylol off the market.

Some say that act was years too late. Others state that Trasylol should never have been approved at all. Still others point to the allegations that Bayer tried to hide the truth.

The $2 million lawsuit, filed September 25 in St. Clair County Circuit Court, is an example of the kinds of lawsuits that are growing from the Trasylol debacle—a sorry tale highlighted by an exchange between Dennis Mangano, and CBS reporter Scott Pelley during the 60 Minutes broadcast of February 17th of this year…

More TRASYLOL News
"Doesn't a drug have to be proven safe before the FDA allows it on the market?" Pelley asks Mangano.

"No," he replies. "The trials that are constructed before a drug is marketed and given approval to be marketed generally address effectiveness of the studies."

"Make sure I understand. If the FDA is not certifying a drug as safe, before it goes on the market, what is it doing?" Pelley asks.

"It's certifying that the drug is effective and that within the small numbers studied, relatively small, it doesn't appear to be unsafe."

Pity those who suffered from Trasylol heart failure, Trasylol kidney failure, or various other Trasylol side effects from a drug that some say should have been gone long ago.
Those people might be alive today, or free from health encumbrances, had it been banished before now.