The future of Trasylol, the heart drug manufactured by Bayer AG, became even more clouded as the year prepared to come to a close, after the Commission on Human Medicines in the United Kingdom advised that the UK marketing authorizations for Trasylol should be pulled, and held in abeyance pending the outcome of a full, European review of the drug that weighs risk against benefit.

At the urging of various health authorities, including the US Food and Drug Administration (FDA), Bayer AG voluntarily pulled Trasylol from distribution earlier in the fall after a Canadian study into the effects and risks of aprotinin, was abruptly halted.

Known as the BART study, the Canadian imitative compared aprotinin (Trasylol) with other drugs with a capacity to control and minimize bleeding during heart surgery. Not only was there a link to heart and kidney damage, but the mortality rates in the aprotinin group resulted in the immediate termination of the BART study.

Bayer AG has said it will voluntarily keep Trasylol off the market until the results of the Canadian study can be analyzed. 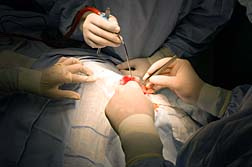 The FDA has backed Trasylol all along, even in the face of controversy when various data linking Trasylol to heart and kidney problems were withheld from the FDA, for reasons Bayer has characterized as regrettable human error. Two Bayer employees were suspended with regard to the issue.

Other independent studies have suggested that Trasylol use doubled the risk of kidney failure and more than doubled the risk of heart failure. The risk of stroke, as identified by a study conducted by the Ischemia Research and Education Foundation, was determined to be 181 per cent higher for Trasylol patients, than those treated with alternative drugs during surgery.

The BART study was doing just that—comparing the effectiveness of aprotinin against alternatives such as lysosine analogues, aminocaproic acid and tranexamic acid. Such alternatives were found to be far less expensive, and thought to be a safer alternative to Trasylol. The BART study was examining this very point when it became alarmed at the death rate amongst participants in the aprotinin leg of the study, and called the halt.

The FDA in the US and other regulatory authorities around the world applauded Bayer AG's decision to halt sales of Trasylol. It is interesting to note that the health authority in Germany, where Bayer AG is based, was much more insistent.

More News
As with other health authorities, however, the Commission on Human Medicines has left a small window open, permitting the continued use of Trasylol on select patients under a 'Specials' regulation. The responsibility of this unlicensed use of Trasylol, however, rests with the prescriber while the embargo is in force.

It can be assumed that licenses for Trasylol will be re-issued, or continued to be held in abeyance, pending the outcome of the review.

Trasylol was first approved in 1993 and has become a popular means by which surgeons mitigate blood loss during open-heart surgery. Despite its cost, Trasylol has been used on more than one million patients worldwide in the last 14 years. It is possible, however, that many patients experiencing kidney or heart issues that could be linked to a prior Trasylol injection, would have no idea that Trasylol may lay at the heart of their troubles—if they were even aware of the Trasylol injection in the first place.

Given available data from existing studies, it's possible that the Trasylol could be the culprit.