In a statement issued by Bayer AG this week, they allege that two recent studies regarding their drug Trasylol are flawed. But a consumer advocacy group called Public Citizen's Health Research Group, has made statements that they believe the studies conducted on the drug are convincing enough that the drug is a danger to those who receive it. 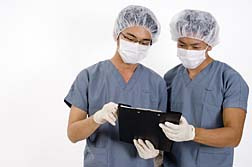 As to why the Trasylol patients had a higher likelihood of dying is a mystery according to the lead author of the study, Dr. Andrew Shaw.

On the market for 14 years because of its ability to reduce the bleeding that usually leads to blood transfusions, Trasylol was removed from the market in the fall of 2007 when a Canadian study was stopped due to patient deaths. The drug has been used to treat hundreds of thousands of patients who have undergone heart bypass surgery. In 2006, Bayer had funded one of the two new studies in which they did not present the results in a federal hearing held in September 2006 regarding the drug's safety. The company has stated reasons as to why they did not present these results.

Despite claims by Bayer that the two studies are flawed; the findings of the studies were published last week in the New England Journal of Medicine.

The second study, which was the one funded by Bayer, evaluated over 78,000 patients between January 2003 and March 2006 from all over the United States. The results were not very different from previous results presented by Bayer in 2006. Bayer actually had the results in their hands before the FDA held their advisory committee meeting about Trasylol.

More News
However, at the meeting, the study that was being discussed by the FDA was one that was completely different and based upon thousands of patient hospital records. What these records showed was that the death rate was high for those who were given Trasylol as was kidney failure that required dialysis. This study made the suggestion that around 2,000 people die each year from being given Trasylol. Other studies have alleged that approximately 22,000 people could have been saved had the drug never been made available on the market or removed by the FDA

There have been some scientists that have stated the results of the research are flawed because the deaths and kidney failure could be due to other factors. At the time of the September 2006 meeting, the FDA had decided to keep the drug on the market. Bayer had stated that it had not shared the details of their study at that time because the results were relatively young and they were still answering questions as to how the study was done. However, they did present the findings later on, which coincided with other studies that stated there were dangers associated with the use of Trasylol.