Trasylol: A Thousand Deaths a Month

You have seen his name before, in various articles about Trasylol, the now-vilified drug that was removed from the active market by Bayer AG on November 5th of last year following a two-year hailstorm of salacious revelations.

Suffering from a heart murmur since he was a child, he had nonetheless led a happy and active life, and thought nothing of the heart valve replacement surgery he faced early in January of 2006. His surgeon had assured Joe, his wife and his daughter that there was a 5 per cent risk of complication from the fairly straightforward surgery. 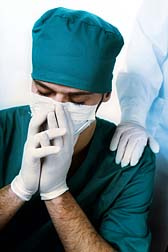 "However, as we now know, that wasn't the case. Joe Randone suffered two heart attacks and renal failure (failure of his kidneys) immediately after surgery. He would never leave hospital again.

He would soldier on to fight, and linger for many months amidst a bevy of setbacks and 19 surgeries in total, before finally succumbing to it all. He dies in August of 2006.

That, we already know. We have already read the heart-wrenching accounts of his plight and that of his family, and the sad details of his doomed, diminishing days.

However, on the night of February 17th, we finally met Joe Randone, thanks to the investigative report 60 Minutes, on CBS. As part of reporter Scott Pelley's detailed and insightful investigation into Trasylol, we were able to finally see the suffering we have read about for so long.

The images of a once hale and hearty man, laying on what would become his deathbed, his heart and kidneys failing, his legs amputated due to poor circulation, his eye lids literally sown shut in an effort to protect his corneas. His gall bladder had been removed, and he was so swollen to be literally unrecognizable, when compared to the images of a happier time, the occasion of New Years' Eve 2005—just two weeks before his surgery.

His wife Josephine has said that a human being who hadn't been as healthy as her Joe, would not have survived as long. But survive he did, for nearly seven agonizing months.

As he lay in his hospital bed, his wife and daughter Marissa by his side, trying to soothe his, and their own pain the casual viewer can see, through the lens of the camera and even through the sewn eyelids, the look of confusion in the eyes of the now-dying man. His eyes were crying out, "why...?"

This particular episode of 60 Minutes would have been tough for Dr. Dennis Mangano to watch. The medical researcher based in San Francisco was the author of an exhaustive study involving over 5000 patients in 17 countries, and published in the New England Journal of Medicine two weeks after Randone's failed surgery.

Mangano's communiqué was the largest Trasylol study at the time to raise concerns over a drug used in one-third of cardiac surgical procedures, designed to mitigate excessive bleeding.

However, while it may have been the largest at that point, it wasn't the first red flag to be unfurled over Trasylol.

In fact, it was more than 20 years ago when Dr. Juergen Fischer, director of the Institute of Experimental Medicine at the University of Cologne, found severe kidney damage in animals given Trasylol. Dr. Fischer informed Bayer, and was surprised to note the manufacturer's dis-interest in his findings.

"I felt that Bayer wasn't interested to examine these side effects," Fischer says, in comments made on-camera to 60 Minutes.

"Thirteen of these patients had problems with kidney function after the procedure," Kouchoukos said of the study conducted in 1992, adding that it was a red flag. "And it appeared that it was related to the use of Trasylol."

It has been noted that smaller studies are less conclusive than larger efforts, primarily due to the sample size. While some additional small studies demonstrated a risk to the kidneys, still others did not.

Dr. Mangano tells CBS reporter Pelley that trials conducted to determine a drug's effectiveness and suitability prior to approval, "generally address effectiveness of the studies.

"(The FDA is) certifying that the drug is effective and that within the small numbers studied, relatively small, it doesn't appear to be unsafe."

Conversely, Bayer AG stopped short of conducting any study or trial that might show conclusively that Trasylol could be unsafe. Instead, the relatively small studies (normal protocol, according to apparent industry standards) demonstrated that Trasylol was effective in controlling bleeding, and while the studies did not demonstrate that the drug was safe, they failed to prove that Trasylol was not safe, either.

Thus, the US Food and Drug Administration approved Trasylol in 1993.

It is fairly common knowledge what happened next. Bayer was successful in marketing and promoting Trasylol, which was well on its way to becoming a $1 billion dollar drug for Bayer. Hardly surprising, given the cost estimated at $1000 per patient.

Then came Dr. Mangano's sensational study, which prompted Bayer AG to undertake a large study of its own. Harvard professor Dr. Alexander Walker was retained to examine the records of some 70,000 patients, in an effort to either support, or undermine Dr. Mangano's own findings.

At stake was an FDA panel that was to convene in eight months time, in September of 2006, to review Dr. Mangano's findings, and a subsequent FDA alert to surgeons and the medical community.

However, the study commissioned by Bayer AG was never brought forward at the meeting. Meanwhile, while the conclusions of Dr. Mangano were debated and taken seriously, it was decided that given his study was not a clinical trial comparing Trasylol against a placebo, and given the lack of any corroborating evidence, Trasylol was given the green light to continue.

Professor Walker, aware that Bayer AG had his report in their hands on the day that the FDA panel convened, approached the FDA a week later.

It should be noted here that while Dr. Mangano's study was a real-world study of patients using hospital records, and therefore did not carry as much weight as a clinical trial might have, a full clinical trial based in Ottawa, Ontario comparing aprotinin (Trasylol) against two other anti-bleeding drugs had to be halted due to an elevated death rate within the Trasylol control group. The findings of the Canadian 'BART' trial are currently being studied by Bayer AG, with a view to determining whether the temporary withdrawal of Trasylol should continue.

The halting of the BART trial in late October of 2007 appeared to be the catalyst for, finally, definitive action regarding Trasylol. Germany, Bayer AG's home base, banned Trasylol immediately, and within days Canadian health authorities and the FDA persuaded Bayer AG to suspend marketing Trasylol pending further review of the BART trial data.

It is also interesting to note that Trasylol, originally approved for use in patients at high-risk for bleeding but later expanded to encompass a third of heart surgical procedures regardless of risk factor, will still be available to surgeons on a case-by-case basis. And at the time that Bayer ceased the marketing of Trasylol on November 5th, a spokesperson for the FDA suggested that the temporary withdrawal of Trasylol, and a subsequent gradual withdrawal of the drug altogether, was important as the FDA did not want to leave surgeons lacking in alternatives.

However, there are alternatives to aprotinin—two, in fact—that not only are far less expensive per-patient than Trasylol ($50, vs.: $1000), but in studies conducted by Dr. Mangano were found to be just as effective as Trasylol in limiting propensity for bleeding, and limiting the need for blood transfusions, "with none of the adverse side effects," Mangano told CBS News.

Meanwhile, after the FDA was made aware of the hidden Bayer AG study shortly after its meeting of September 2006, it took the FDA another year to schedule another panel review, in September of 2007, during which time all the available data was debated. For its part, Bayer claimed that two Bayer officials were responsible for not forwarding Professor Walker's report for presentation to the 2006 FDA panel, had reprimanded the individuals involved, and chalked the whole thing up to grievous human error.

More News
Still, the FDA panel voted to keep Trasylol on the market. It wasn't until the BART study was halted due to deaths from acute renal failure brought on by Trasylol, that the FDA finally acted, almost two years after Dr. Mangano's report was first published.

Dr. Mangano can only think about the lives lost, over the course of that two-year delay.

"Between my study and November 5, when it was taken off the market, there were approximately 431,000 patients who received the drug. As I calculated, 22,000 lives could have been saved. It's about a 1,000 lives saved per month delay in taking that drug off the market," Mangano told 60 Minutes in a segment broadcast on February 17th, 2008.

"Good medicine demands that you protect the patient. That's the issue here, and not the drug, and not the profit margin."

Bayer, it has been reported, is expected to announce record profits for 2007, partly a result of Trasylol.

The Randones are suing the manufacturer.
READ ABOUT THIS LAWSUIT