"I heard on the news that we should throw out the contents of Topps beef burgers after they were recalled," says Miriam S., "but I'm keeping mine as proof that I was sick."

Miriam S. (not her real name) cooked herself a Topps burger and it tasted pretty good, but later that night she started to get really bad cramps. "They were really painful and I was worried," she says. "I tried to throw up by drinking baking soda and hot water but it didn't work. Then around 4 am a lot of blood was in my stool and that scared me." All she could do was lie on the couch—Miriam was alone and too sick to drag herself to the doctor or the hospital. 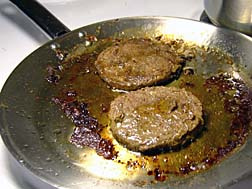 "That was a long day—every breath I took was painful," she says. " I thought I was going to die. I am 54 and in good health so this came right out of left field. I had no idea what was going on with my body, what was causing this sickness. I was very weak and kept getting hot and cold. Everything was being thrown out of my body. After that, my stomach was really sore and swollen for about three days and I was scared to eat anything. As you can imagine, I lost quite a bit of weight!

"The only thing I had eaten that day--besides the burger--was fish with salad and grits. I had been on this particular diet for some time so the only new thing I had eaten was the Topps beef burger. I had no idea the burgers were recalled until I heard it on the news, days later. And I still have the box—with all but one of the burgers—in my freezer. And the numbers match those on the recall list.

More News
The news said 'throw the contents away' but I'm keeping this box as proof that I was sick. I hope it doesn't happen to anyone else. I hate to think what this could do to a child—I heard about a 12-year-old who was sick."

On October 5, 2007 Topps Meat Company, founded in 1940, announced it was going out of business after nearly 22 million pounds of its frozen ground beef, possibly contaminated with E.coli bacteria, was recalled. The initial September 18 recall involved 332,000 pounds of hamburger patties.

Topps was the largest US manufacturer of frozen hamburgers.

The USDA was notified on September 7th that Topps hamburger patties had tested positive for E. coli bacteria, yet a recall wasn't announced until September 18th . Meanwhile, the Department of Agriculture's Food Safety and Inspection Service (FSIS) is under fire for an 18-day delay in issuing its warning about the E. coli-tainted hamburger patties.