In one of the first positive steps to come out of the massive Topps beef recall in late 2007, a new program announced January 4th by the USDA Food Safety and Inspection Service (FSIS) will see enhanced risk-based sampling and testing for the nasty E. coli 0157:H7 pathogen in raw ground beef.

Food safety inspectors had come under fire for inaction in the face of deficiencies and practices at the Topps Meat facility in Elizabeth, New Jersey. Meat packers and processors are required to have their premises inspected on a regular basis, in an attempt to head off potentially troubling circumstances—the kind that led to one of the largest meat recalls in US history.

Topps was found to have dropped the ball with regard to testing and other practices and protocols, including the mixing of different batches and lots of meat. Such practices can, and did create a much wider swath of destruction. 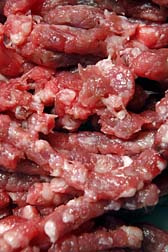 Under the new FSIS protocol, the food regulator will take into account establishment volume, and whether the facility has had any FSIS or Agriculture Marketing Services positive results within an immediate period of 120 days.

Inspectors will be mandated to collect a minimum of four samples, to a maximum of 24 samples in each calendar year. The new standard is over and above requisite follow-up testing, at such time as an organization is tagged with a link to E. coli.

The follow-up testing is an issue unto itself. In the Topps meat recall debacle, the requirement for rigorous follow-up testing only delayed the recall, which occurred in early October. The first illness potentially linked to E. coli was reported in July of last year, soon to be followed by several people falling ill, over several states. Topps came under suspicion later that summer, and the company provided samples for testing. However, it wasn't until the end of September before testing was complete, implicating Topps and triggering a recall that started small, but was quickly expanded to nearly 22 million pounds.

From the time of the first report in July, to the recall in October, several months had passed. Given the popularity of processed and pre-packaged hamburger as a summertime staple, it suggests that fewer people may have been adversely affected had the recall happened sooner.

The recall forced Topps Meat Company, once a family-owned operation but in recent years controlled by an investment firm in Buffalo, to close its doors.

On January 8th, the assets of Topps Meat Company were sold for $1.25 million. The company's trademarks and equipment were purchased by TMC Acquisition Co., an entity controlled by William Morris, which is owner of Hickory Foods. Inc. As part of the package, TMC acquired a few million pounds of hamburger still remaining at the Topps facility which, if found to be contaminated, will have to be destroyed under federal law.

More News
Another firm, MSDT Acquisition, which is affiliated with Premio Foods, acquired the remainder of the Topps facility lease and flash-freezing equipment for a quarter of a million dollars.

The bulk of the money will be used to compensate secured creditors.

Last year turned out to be a banner year for recalls. Those recalls, together with the massive Topps recall prompted the FSIS to review its oversight procedures. The agency undertook to identify those improvements quickly, and announced the first phase on October 24, a few weeks after the recall.

That wouldn't have helped those who were sickened by the extremely serious E. coli 0157:H7 strain, which can cause healthy people extreme discomfort for several days, but can have catastrophic effects on the infirm, the elderly, children, or people with weakened immune systems.