In business, as in life, perception is everything. Thus, one has to wonder if any of the Stand 'n Seal deaths or injuries incurred by well-meaning consumers might have been prevented if the manufacturer—and all manufacturers—had the guts to really tell it like it is.

Oh, but legally they don't have to. And you wouldn't sell product that way. So you soften the hard lines, make it look harmless, and make sure the risks are delineated in fine print too small for many people to read.

Tile Perfect Stand 'n Seal was finally recalled from the market after countless people were sent to hospital with respiratory problems. Two people died. The convenient grout sealer, distributed exclusively through Home Depot by Roanoke (now BRTT), was widely popular given its convenience. Sealing, or waterproofing bathroom tile and grout can often be labor-intensive. Imagine the relief felt by consumers, given the ability to just pop off the top, point, and spray. 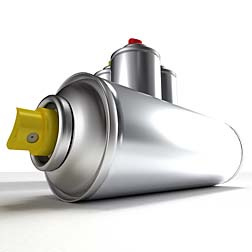 The cardboard display in the store showed an average Joe happily spraying the tile, without a mask, in a room without ventilation and a window that was closed.

The can stipulates that vapors evaporate harmlessly. As a consumer, what would YOU think? What conclusions would you draw from that?

That the product is safe, and hassle free.

Ah, but that's the perception.

Imagine, instead, a consumer's reaction to an in-store promo depicting a stern-looking individual wearing a mask over his face, in a room with the window wide open and a large fan blowing the fumes out into the outside air.

And imagine if the can warned against breathing in the vapors, in text large enough for you to plainly see. Indeed, in print the same size as the print actually used to promote the fact that vapors evaporate harmlessly.

Result? The good news for you, the consumer, is that you would immediately have an accurate accounting of the risks inherent with using the product.

The bad news for the manufacturer is that you might choose not to assume that risk, and not buy the product.

Such is the folly of fine print, and the unfairness of manufacturers leading the consumer down the garden path in an effort to spur sales by minimizing the risks and playing down the bad stuff.

Of course, there were other factors at play in the Stand 'n Seal case.

For one, a supplier switched the active ingredient; apparently without telling the manufacturer it had done so. The new, active ingredient was not designed for use in an aerosol, which Stand 'n Seal clearly was. The manufacturer deferred its responsibility to communicate health incident reports to authorities until a physician with a poison control center threatened to report the product himself. And internal company memos suggest that the manufacturer lobbied hard to see the product remain on store shelves even with a recall looming.

When the affected cans were finally recalled, the replacement cans contained the same formulation as the recalled cans.

There are also questions surrounding the US Consumer Product Safety Commission's (CPSC) handling of the recall. It is widely held that the CPSC is understaffed and under funded, although recent congressional proposals to inject new funding in an effort to make the organization stronger and more effective was met, incredibly, with opposition by the agency's interim leadership—leaving one to ponder just where the CPSC's allegiance lay: with public protection, or with business?

More News
The foregoing notwithstanding, you have to wonder if two individuals now dead would still be alive, and scores of consumers spared hospitalization and in some cases months of rehabilitative treatment had the manufacturer of Stand 'n Seal been required to advertise and promote the health hazards in similar fashion to those required by the tobacco industry, for example.

Mind you, tobacco warnings in the United States are a far cry from the large, graphic warnings adopted by some countries, including Canada.

But at least you can read them without a magnifying glass. And that's the argument with fine print, and the laughable loophole manufacturers and product providers have at their disposal in order to fulfill regulatory obligations of disclosure, without taking away from the marketing message.

In the words of Tom Wait, from his 1976 album Small Change, "The large print giveth, and the small print taketh away."

In this case, the small print on a can of Stand 'n Seal taketh away two lives.