The difference between a company knowingly misleading the consumer with a defective product, such as Stand 'n Seal, and the consumer injured from that product, is that in the end the company doing the misleading may have to pay some settlements, write off some legal bills, perhaps face increased insurance premiums—but at the end of the day the proponents get to go home to their families, play a little tennis, and move on with their lives.

Luckily, 11-year-old Tyler Himmelman got to go home to his family. He recovered sufficiently from his injuries to at least resume attendance at school. He can breathe again, but his life has changed. His lungs became dangerously exposed to the toxic fumes of Tile Perfect Stand 'n Seal, and Tyler was rushed to hospital. His condition was considered at the time serious, and he would remain in hospital five days with inflamed lungs. 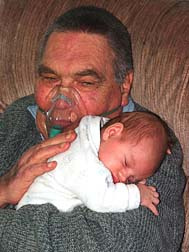 Tyler was fortunate, but others haven't been so lucky. A 63-year-old physician required oxygen therapy for months after his lungs were compromised from using Stand 'n Seal in an un-ventilated room. And there have been dozens of similar stories from across the country, as consumers continued using a popular product, unaware of a change to the active ingredient that dramatically increased the risk to the respiratory system.

In fact, the new active ingredient was never intended for use in an aerosol form. Stand 'n Seal's attraction was the convenience of an aerosol spray for sealing tile and grout in bathrooms, kitchens and other rooms subject to moisture penetration.

Nearly 200 lawsuits have been filed at the behest of consumers injured, or by the families of those who have died at the hands of a seemingly innocuous product that consumers believed was no more harmful than using an air freshener. And little wonder, given how the product was marketed. Photos depicted Stand 'n Seal being applied adjacent to a closed window, by an individual without benefit of protection from any kind of breathing apparatus.

And yet, this flies in the face of information provided to contractors, who were instructed to wear a mask, and expressly forbidden to avoid breathing in the vapors.

That caveat is also printed on the can, but in fine print. Reference to the claim that vapors evaporate harmlessly is, not surprisingly, in a larger font.

Anyone overtly given to caution might adopt a facemask when using any kind of aerosol, but such over-the-top responses are rare. Most individuals will take such precaution only when there is a reasonable expectation, or suspicion that it is necessary.

In this case, there was little to warn the consumer that they were exposing their lungs to a serious hazard.

What's more, it is alleged that the manufacturer knew all along there were health issues, but did not act until it learned that officials with poison control centers were on the verge of reporting the company themselves.

Lawyers for the Himmelman family, who are suing Roanoke (now BRTT) and Home Depot, where Stand 'n Seal was distributed exclusively, have stated they will show that defendants "...had knowledge that the product was harming people several months before it harmed Tyler," said Dan Sloane, who is representing the Himmelman family in their action.

Tyler, after five days in hospital, is still sufferring the after-effectrs of exposure to Stand 'n Seal. The once-active adolescent can no longer play football or run cross-country, as his breathing has been impacted from exposure to the active chemical, Flexipel S-22WS. It is not known whether, with time, he will regain his complete lung function.

More News
In the meantime, after several miscues, Stand 'n Seal is finally off Home Depot shelves. The distributor released a statement October 8th claiming that it never knowingly sold defective product. In its statement, Home Depot references the involvement of the Consumer Products Safety Commission, and the initial, voluntary recall of Stand 'n Seal in 2005. Home Depot notes that the manufacturer removed the affected product and replaced the recalled cans with new product—product that was believed to have been re-formulated. However, it soon became apparent that the replacement cans were continung to make people ill. Home Depot removed the product completely in March of 2007.

There are also questions surrounding why it took the CPSC several weeks to get around to issuing the voluntary recall, which it finally did in late August of 2005. That, combined with the foot-dragging on the part of Roanoke/BRTT, resulted in a months-long delay in announcing the recall, during which time dozens of people were injured needlessly.