Stand 'n Seal: Harmful if Swallowed, and then some!

Frank B. bought a pallet of tile and four cans of Stand 'n Seal from Home Depot: he had a big project in store. "After the tile dried, I used this grout sealant and did exactly what I read in the instructions--stand and spray," says Frank. Trouble was, Stand 'n Seal did more than seal the tile. Frank believes it also got into his lungs. Think about it: you are in a small area, the air you are breathing is filled with a chemical and you have no protective gear, not even a face mask. Why wouldn't it find a way into your respiratory system?

"I woke up the next morning and couldn't catch my breath," says Frank. "I went to my regular doctor and she made arrangements for me to go to a pulmonary doctor. He put me through a battery of tests that same day, including an echocardiogram--he couldn't figure out why I was having breathing problems. Then I was put on oxygen. This was in November 2006. 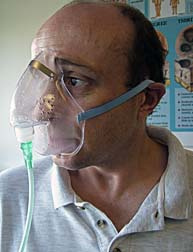 Since then I have an oxygen tank and mask by my bedside and put it on every night. I also have a few inhalers which don't seem to be working very well.

About one month ago I saw the recall on TV (I never associated my problem with this product) and I went back to my pulmonary doctor with this can of Stand 'n Seal.
'Could this be my problem?' I asked him. 'I really don't know', he said, still perplexed. He didn't even read the ingredients on the can—I wasn't too impressed with him.

More News
I have never had any breathing problems prior to this. I quit smoking 35 years ago but felt better when I smoked! Now I walk from my bedroom door to the garage and have to stop, sit down and try to catch my breath again. It is getting worse.

When I saw the recall on TV I tried to figure out when I used it. It is too coincidental—why wasn't I notified? I even had a charge account at Home Depot. That upset me the most—the manufacturer and Home Depot should have taken more care and notified consumers. Next up, I took the leftover half- full can out of my garage and looked for warning labels. The ad I saw on TV had two warning labels on it—both top and bottom that said 'danger'. I recorded it.

There is no warning on the can I have: all it says is 'harmful if swallowed'. I don't drink this shit. I breathed it! These tests cost me a fortune. I would at least like to see my medical expenses paid."