Stand 'n Seal: Trust No One, But Yourself

It's too bad when a civilized population, peace-loving and living within the confines of the law, can no longer depend on government statutes and entities designed to shield them from harm and adopt almost militant tactics in an effort to protect their health and well-being from someone else's greed. But that's what happened in the Stand 'n Seal grout sealer case, when a seemingly innocuous aerosol can wreaked havoc on the lives of dozens of people.

And cost two people their lives.

Tile Perfect Stand 'n Seal, the spray-on grout sealer in the pretty blue and yellow can, is off the market now. It was pulled from store shelves at Home Depot, the exclusive retailer for the Roanoke (now BRTT) product, in March of this year, 18 months after it was recalled.

Oh, it gets better. But first, let's put you, the reader, in the middle of the action.

There you are, facing the arduous task of sealing the grout, and the tile, in your bathroom. Something you normally have to do with a brush or a trowel. It's messy, and labor-intensive. 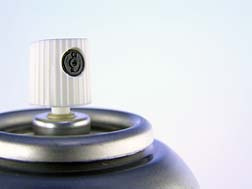 One day, you're in Home Depot, and you discover Stand 'n Seal sealer. No longer do you need the trowel, or face a messy clean up. Just take this pretty blue can, and spray it on. The marketing photo shows a person just like me, standing in a bathroom just like mine, spraying the wall. The window is closed in the picture, which is good, since it's February and bloody cold outside. The consumer, just like me, isn't wearing any kind of a mask. And the can says the vapors evaporate harmlessly. Oh sure, there's fine print, but who has time to read the fine print? Besides, I'm a senior and I have trouble reading at the best of times.

So you take it home, and away you go. Seems harmless, you think. Doesn't smell bad. And such a pretty blue can...

Imagine yourself in that situation; you're alone in your car, moving along the freeway, and you suddenly are unable to move. Imagine, trying to wrestle the steering wheel in an effort to pull over, to avoid being killed or killing others on the highway. Imagine being in your car, without a cell phone, unable to breathe, unable to move, unable to call for help.

That's what happened to some.

Imagine yourself on the bathroom floor, literally foaming at the mouth. That's what happened to some people.

Imagine your child, or grandchild, writhing on the floor, in fear of their lives, foaming at the mouth and unable to breathe.

That happened, too. All due to a pretty blue can of Stand 'n Seal.

That pretty blue can contained dangerous chemical hydrocarbons that could invoke serious respiratory repercussions if inhaled.

But here's where it all breaks down.

There could be nothing on the can that identified those hydrocarbons. How could there be? The manufacturer—Roanoke—claimed that unbeknownst to them a supplier switched the active ingredient from one made by Dupont, to one made by Innovative Chemical Technologies of Cartersville, GA called Flexipel S22WS. This new active ingredient was never designed to be used as an aerosol in the first place.

That's breakdown number one. A breakdown in communication.

Next, reports start coming in that people are becoming ill from using Stand 'n Seal. However, instead of reporting the incidents to the US Consumer Products Safety Commission (CPSC) within 24 hours as it is legally required to do so Roanoke drags its feet, instructing employees manning a consumer hotline not to let on that others have, too fallen ill. Weeks go by until the manufacturer is shamed into reporting the incident.
Even then with a recall looming, it is alleged that internal Roanoke documents show that the manufacturer lobbied to keep the product on store shelves.

For its part, it took the CPSC weeks to get around to announcing a recall. Given that the CPSC hasn't the staff to police, and ensure that the recall happens, left it to the manufacturer to facilitate the recall, and to ensure defective products are replaced with non-defective ones.

More News
Turns out, the replacement cans were just as defective, and proved just as harmful as the recalled cans of Stand 'n Seal, despite the CPSC announcement that all cans manufactured after June 2005 were okay.

So—can you trust, implicitly, a manufacturer to ensure that the health and well being of the consumer is assured? Not when there is a buck to be made.

Can you trust the CPSC to ensure that defective products are kept out of the consumer pipeline? No, because the CPSC is under-funded and under-staffed, and at the moment appears to be resisting an invitation by the US government to grant it more funding for additional staff and resources, which to say the least is rather curious.

And can you trust the fine print? Perhaps, if you can read it. But in this case, there is the suggestion that even the fine print may not have helped.

In the end, the only person you can trust is you.