Most of us don’t think twice to talk with our doctor if we think there is an issue—a side effect—associated with a prescribed medication. But many people with mental illness don’t have the wherewithal to seek help. Such is the case with Jared, who was prescribed Risperdal for bipolar disorder and schizophrenia. He developed gynecomastia, or “man boobs” and was unable to talk about it with his doctors, most of whom were at hospitals for mentally ill patients. 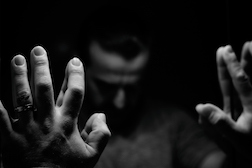 Jared, age 37, started taking Risperdal in his late teens. By the time he was 21, friends started calling him “Booby Brooks” (Brooks being his surname). Needless to say, he experienced physical and psychological trauma due to gynecomastia, a Risperdal side effect. “I needed help and I’m not denying that Risperdal helped my bipolar disorder,” says Jared. “But by age 21, I started growing breasts, which are painful and very embarrassing. It wasn’t easy in my early 20s with so many stares. My close friends still call me Booby Brooks, but it is still frustrating.”

At the age of 18, Jared became a ward of the state. “That is when I made wrong choices and overdosed,” he says, adding that he is lucky to be alive. “Reality jumps in and out of my life. The meds are working right now, talking to you. When they aren’t working I hear voices and get delusional. I suffered a lot of brain damage from ages 18-24 and I’m told it is permanent psychosis.

“Most of the time I don’t know how to get help, until I switched to a different medication.” Jared was “on and off” Risperdal until 2010, when he was diagnosed with schizoaffective disorder and was prescribed Invega.

Invega (paliperidone) was FDA-approved in 2006 for treatment of acute schizophrenia. Also called the son of Risperdal, it has been found to have the same side effects as its derivative—risperidone. And both drugs are made by Johnson & Johnson. Both medications work by blocking dopamine receptors. In doing so, the production of the hormone prolactin is blocked. As prolactin levels are elevated—which are normally at very low levels in men and very high in pregnant women—gynecomastia develops. When Risperdal or Invega causes gynecomastia in men and boys, their ‘breasts’ might even begin to produce a milky white discharge.

More RISPERDAL News
“I never knew about Risperdal and male breast growth until about 2013 when I saw it advertised by a law firm on TV,” says Jared. “I was shocked but at the same time relieved, maybe I could get rid of these breasts. The attorney I am seeing thinks I can get a breast reduction and I signed a disclaimer. I sent my attorney photos of my breasts and they are finding all the drugstores where I had my prescriptions filled. I lived in several regional state hospitals, including Lincoln, Hastings and Norfolk.

“Now I’m not so embarrassed to talk about being “Booby Brooks” because I know others are suffering too and I’m not alone.”

According to a study by the New Zealand Medicines and Medical Devices Safety Authority, more than 90 percent of those taking Risperdal had elevated levels of prolactin. In clinical trials involving 1,885 children and adolescents taking Risperdal, 43 boys experienced gynecomastia. Since the FDA approved the drug for use in children, hundreds of boys have developed breasts, some with breasts as large as “D” cups, while on the medication.